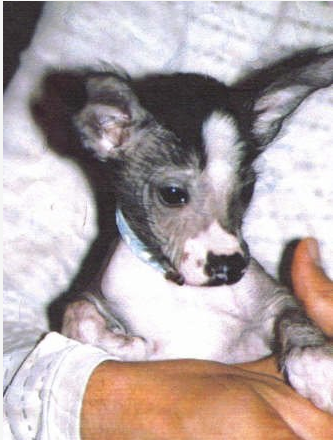 In ancient times, Xoloitzcuintlis were sacrificed and buried with the newly departed. Most of the time, it was with their master, but sometimes it was a stranger to them. In any event, the dog was tied to the deceased with a red ribbon so that the dog wouldn’t get “loose” in the afterworld. The Xolo’s job was to guide the soul of his or her master through nine levels to reach Mictlan (heaven), then help him cross the Chiconahuapan, a river that was the last level before getting to Mictlan. According to the belief, the Xolo would swim across the river with the soul of the person on their back. A red dog was preferred because black ones were too “dirty,” and lighter colored dogs were too “pure,”  but whatever color the dog, crossing the river with the soul of his or her master got the dog dirty from the water.

Once the pair reached heaven, they met Mictlantecuhtli, lord of the underworld.  Mictlantecuhtli always asked the Xolo if s/he wanted to stay in heaven or return to earth. Some dogs decided to stay with their beloved master in heaven, but dogs who had been sacrificed for someone they didn’t know had no particular loyalty to them, and chose to go back to earth. In order to return to earth, however, they had to cross the river one more time.

Instead of making the dogs dirty the second time they crossed the river, the water cleansed them. These dogs returned with white marks on their legs, chests, tail, and sometimes face because that’s where the water splashed them the most. Back on earth, everybody knew that a Xolo marked this way had returned to earth from the underworld.  Now, when you see a butterfly Xolo, you know that the dog is a blessing sent directly from heaven.

We thank Giovanna Suedan for the wonderful telling of this story, and for sharing a photograph of her first, Xolo, Mia, a Butterfly Xolo.