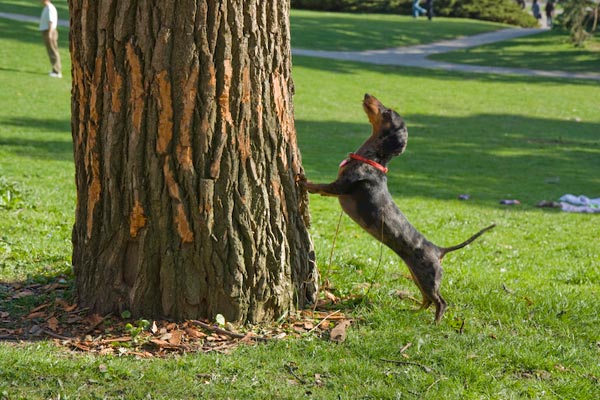 “Barking up the wrong tree” is an expression most of us have used at least once in our lives. While we all correctly assume that the origin of the phrase has to do with dogs, the origin is more precise than that.

The earliest known printed citation of the expression appeared in James Kirke Paulding’s Westward Ho! published in 1832: “Here he made a note in his book, and I begun to smoke him for one of those fellows that drive a sort of a trade of making books about old Kentuck and the western country: so I thought I’d set him barking up the wrong tree a little, and I told him some stories that were enough to set the Mississippi a-fire; but he put them all down in his book.”  The phrase caught on because it went on to appear in several American newspapers through the rest of that decade.  In 1834, the Gettysburg newspaper The Adams Sentinel, included this passage: “Gineral you are barkin’ up the wrong tree this time, for I jest see that rackoon jump to the next tree, and afore this he is a mile off in the woods.

Common use of colloquialism, however,  arose from the world of raccoon hunting typically done at night by – wait for it – coonhounds. A dog may have chased a raccoon up a tree and loudly bayed, “Its here, it’s here!!” without realizing that high above him, the raccoon has jumped to another tree.

This can cost a competitor points if done during competition in a sport that demands a certain bit of crazy.  Being alone a good deal, and going without sleep in pursuit of a critter that comes out at night calls for dedication – or lack of judgement (grin). And yet, competitors and coon hunters wouldn’t give up the thrill of standing in the dark, and listening to their dogs’ distant baying for anything.

In competition, a hunter has to hear their dog’s voice to score points, and they must understand every nuanced inflection to be able to inform a judge when their dog hits a trail or trees a coon. Getting it wrong by barking at a false trail or barking at an empty tree are severely penalized and can cost up to 100 points.

These days, the AKC is involved with coonhound hunts – and in 2020, the club will join forces with the South Georgia Coon & Squirrel Hunters Association in a benefit hunt with a $7,500 purse to the overall hunt winner, or “agree to split.” Organized competitive hunts, however, date back to the mid 1940’s when a small group of coon hunters formed the American Coon Hunters Association that put on Wild Coon Hunts in which hunters and their hounds could “show their stuff.” The ACHA hit its apex in 1985 when 635 dogs participated in DuQuion, Illinois for the ACHA World Championship. The ACHA and AKC merged to form ACHA/AKC in the mid 80’s, but merger was unsatisfying to both the AACHA and the AKC, and shortly after, each went their own way.

The AKC is still active with coon hunts, and you can find a schedule of events here, as is the United Kennel Club.  There are also independent club hunts, such as the Coon Hunting Club and the Professional Hunting Club.

Image: Even Dachshunds can bark up the wrong tree! Image found on Pinterest and happily credited upon receipt of information