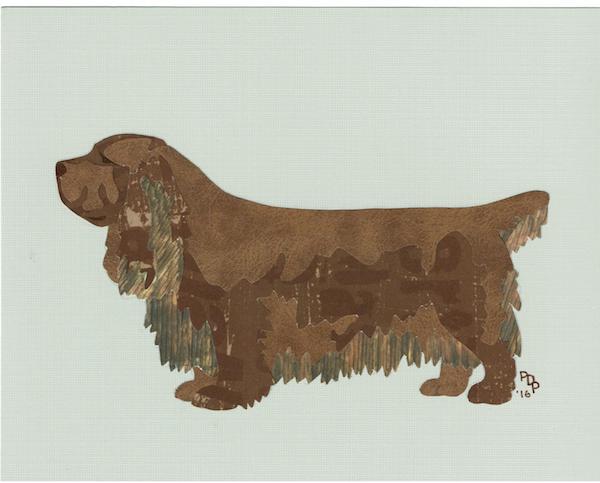 Anyone in the audience who failed to notice “Bean,” in the Best in Show ring from the last two Westminster Kennel Club shows was either in a coma, or at the concession stand.  The Sussex Spaniel thrived on the energy of the audience, and the more he performed his signature, “sitting-on-his-hind-legs-with-his-front-paws-in-the-air” move, the more the crowd responded. It was a love affair between the audience and Bean (start at the 4:30 mark):

Experienced fanciers, however, noticed something else about Bean, and that was his adherence to the breed standard. A long body with short legs and a round, deep chest produced a dog that moves with a rolling gait, but in no way is this a clumsy breed. Coordinated and with purpose, a Sussex moves out freely and with power. As a hunting dog, he needs all of the above to easily penetrate dense brush to flush game, often on the heavy clay and dirt of Sussex County where his breed was originally bred.

But wait, we can’t overlook that tail!

In his European compilation of dog breeds, Baron c. Bylandt wrote that the Sussex possessed beau mouvement de la queue, or beautiful tail movement. Bean did a nice job of illustrating the point, and of promoting a wonderful breed that, sadly, is listed as a “Vulnerable Native Breed” by the Kennel Club of Great Britain, and has been since 2004.  Only 34 dogs were registered with the Kennel Club last year (2018).

Did we mention that Bean’s grandsire is “Stump,” Best in Show winner at Westminster in 2009, and the oldest dog to have ever done so?

Image: Sussex Spaniel created from 10 to 20 individually hand cut pieces of paper, in a variety of colors and patterns, then combined in layers and mounted on color stock by
Patricia Peters – CanineCutUpsiah
https://www.etsy.com/shop/CanineCutUps