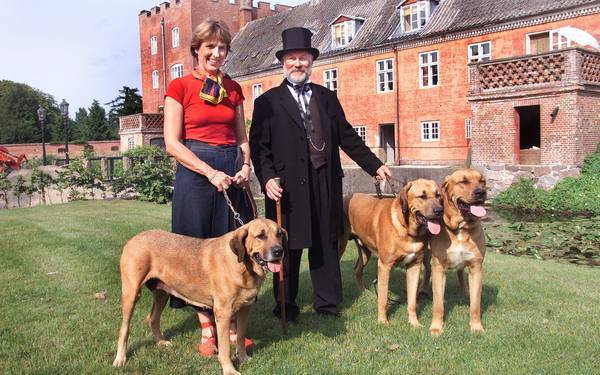 Dogs have been an integral part of human history, but largely taken-for-granted because they were always in the background, quietly serving man. As a result, canines were given short shrift in historical documents, artwork, and even in the scientific community which studied, dolphins, primates, and even bugs before they got to canines. Imagine the understanding we would have of our breeds today if we had the original notes, sketches, and records of what came before us.  Shoulder shrug. What can one do.

We learn with frustration that around 1800, one Danish dog book described the Danish Broholmer as a “very ordinary breed,” especially around Copenhagen.

There is nothing ordinary about a breed that was developed centuries before written records were kept of dog breeding.  There is nothing commonplace about a breed with a massive head that despite its huge size, prefers to sit on its beloved owner, has a heart of gold, and is excellent with children.

The breed’s ancestry includes Mastiffs sent to the Danish courts of Frederik II in the 16th century, and once in England, the dogs were bred with local dogs – perhaps Great Danes – to refine the phenotype of the Mastiff. During the 17th century, the Danish Mastiff-like dog was also a pack hound, particularly on royal hunting grounds. Over time, the Broholmer was shaped into a working dog, but royal courts always maintained an interest in the breed, and as late as the late 1800s, the breed was still kept as noble dogs by royalty such as King Frederick VII and his consort, Countess Danner who owned several Broholmers. In fact, the personal coat of arms of Countess Danner was a Broholmer, and a few portraits depict the couple with their dogs at Jægerspris Castle.

Around the same time, Count Sehested of Broholm began a breeding program in an effort to standardize it. Its popularity spread, and an official standard was recorded in 1886.  Sehested tried to find as many good Broholmer dogs as he could, and he was known to give a number of people a dog for free as long as they promised to breed a litter. In tribute to his efforts, the breed received his name, Broholmeren, in Danish. After decades of following his strict breeding guidelines, the breed became standardized and more defined. It began to flourish once again.

And then two world wars brought the Broholmer to the brink.  A big dog was expensive to keep, let alone feed. By 1974, the Danish Kennel Club recognized that this was a breed in need of saving. The Committee for National and Forgotten breeds was appointed by the club, and how disheartening it must have been when committee members found only two surviving dogs of the original type in the entire country. A successful nationwide campaign located a few more dogs in remote villages, and a rebuilding effort commenced. In 1982, the breed was formally recognized by the FCI.

As of 2003, there were believed to be there are 550-600 Broholmer in the world. In 2006, the breed became recognized by the United Kennel Club, and currently it is listed on the AKC’s Foundation Stock Service.

Image: From 2003, Anne Lütken with Torben Elmedal, chairman of the Broholmerselskabet in Denmark. Photo: Kim Rune