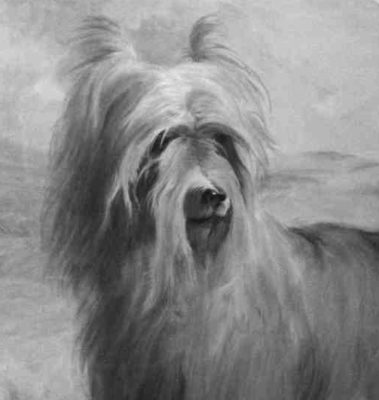 Our series named, “Not Just a Pretty Face” focuses on dogs who’ve proved they can still do the job for which their breed was created while making a good stand in a show ring. We should add that the dogs we’ve presented in the series are (or were) alive at the time we got their information.

There is one dog, however, whom we would have been proud to include in the feature had he been born more recently. As it was, “Ben” died far too young at the age of six in 1871 when he was run over by a horse-drawn carriage. Ben was famous enough that after his death, his body was preserved and kept under glass which many went to see long after his death.

Ben had been born in Hudderfield, England, a town reflected in his name, “Huddersfield Ben.” Line-bred by Mr. W. Eastwood, his mother was a great-great-grandmother of a long coated black and tan terrier born in 1850 named, “Old Crab.” Great-great-granddad was a Paisley Terrier named “Old Kitty, and the pair are the earliest recorded predecessors to the breed we know as the Yorkshire Terrier. Their descendent, Ben (registration number 3612) would be credited with being the foundation sire for the Yorkshire Terrier.

Ben was biddable, showed tremendous poise, and easily won 74 prizes throughout his show career. He placed second in Manchester in 1869, and took a first in 1870. He also won first prize at the prestigious Crystal Palace dog show in 1870, and won second prize the year after. One authority on the breed wrote in 1891 that, “Huddersfield Ben was the best stud dog of his breed during his lifetime, and one of the most remarkable dogs of any pet breed that ever lived.” Ben was the most sought after stud dog of his day, if not before that comment, certainly after! His owner was Mrs. MA. Foster who was one of the best-known Yorkie breeders at the time, and also the first woman ever to judge a dog show in England.

Ben’s accomplishments weren’t only in a show ring.  He was a bit of a local celebrity for having won numerous rat-baiting competitions. Though the sport is illegal today, at the time it was a necessity dressed up as entertainment. In the 19th century, rats were often dubbed the devil’s servants because of their association with spreading the Black Death in the 14th century. The legacy of the plague ran deep in British folklore, having killed, as it did, two million people. One of the worst aspects of the disease to God fearing individuals was that people died without having received last rites or the chance to confess their sins, and this was a stigma that lasted and was passed down in family folklore until the end of the 19th century. Rats carried disease, bit children and the elderly, and were a serious problem.

Ben was not just a pretty face, but he was a ratter par excellence, and that fulfilled the breed’s legacy as a dog that miners, weavers, and other Scottish business owners used to keep their workspaces rodent-free.

2 thoughts on “Ben: “Not Just a Pretty Face” Yorkie”