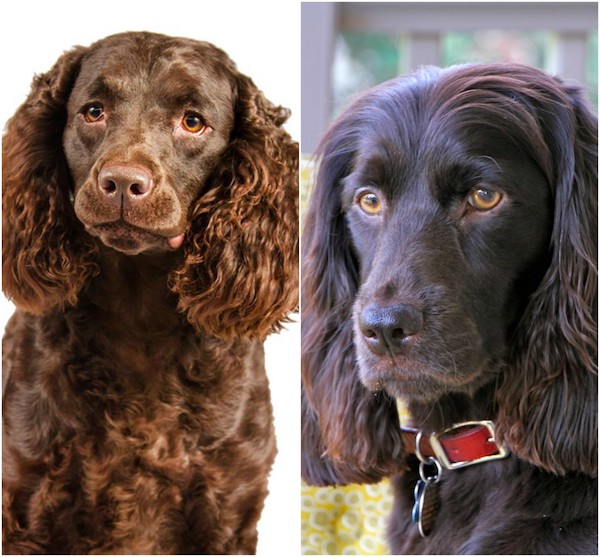 You are not alone if you have trouble identifying certain breeds that seem similar to each other until their differences are pointed out.  Recently, we offered tips on how to tell an English Cocker Spaniel from an American Cocker Spaniel, and now we’ll attempt to the same with the fabulous American Water Spaniel, and the fantastic Boykin Spaniel.  Be sure to study the photograph, the AWS is at the left, the Boykin Spaniel at the right.

Both are gun dogs with All American origins. Both are State Dogs, the American Water Spaniel the state dog for Wisconsin, the Boykin the State Dog for South Carolina. Both are friendly, happy dogs, and both are great with kids.

But there are differences and the most visible one is the coat. The American Water Spaniel always has either marcel (uniform waves) to a curly, thick coat that sustains the dog in the cold Wisconsin winters and frigid water. Because we are big fans of mnemonic devices (techniques that help a person remember something, and yes, sometimes they’re silly), we’ll share ours. If you can remember that many American Girl Dolls have wavy or curly hair, you’ll remember that the American Water Spaniel has wavy or curly hair.

The Boykin Spaniel, on the other hand, has a coat that can range from flat and slightly wavy to curly hair, and sometimes it can look fluffy because of the feathering on the belly, chest, ears, feet, and legs.

Another quick way to differentiate between the two breeds is to simply look at their tails. Boykin Tail is docked at an early age to a length of 3 to 5 inches when fully mature, while the American Water Spaniel has a rocker-shaped tail that’s tapered, arched and a bit feathered.

There are those who say that American Water Spaniels tend to have pronounced brows that give them an expressive look bordering on opinionated. Boykin Spaniels may not have the eyebrows, but they have piercing eyes.

As we own neither breed, we welcome the input of owners of either, and especially, we’d like to get feedback on the differences in the breeds’ hunting styles.

9 thoughts on “The Boykin Spaniel and The American Water Spaniel: Differences”