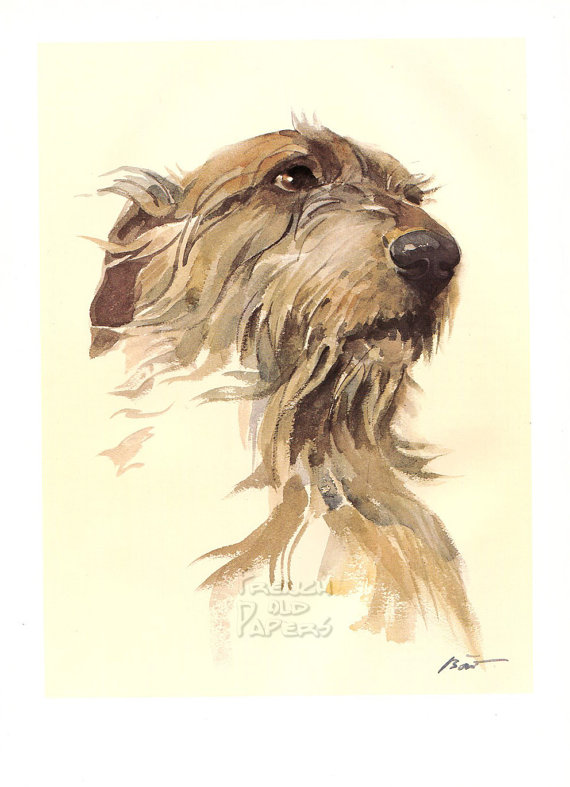 The “Big Dog of Ireland,” isn’t just the tallest of all dog breeds, it’s also likely the oldest Irish dog breed going back at least as early as A.D. 391 when the Roman Consul, Quintus Aurelius Symmachus, mentions the dog in a letter to his brother, Flavianus.
The Irish Wolfhound fell into trouble in the 17th century following the disappearance of wolves and elk from over hunting, as well as the steady depletion of the breed from too much exportation as gifts to royalty and noble personages. The matter was serious enough to have warranted a Parliamentary order in 1652, prohibiting all persons from exporting any Irish Wolfhounds.
By 1800, the dogs were hard to find, and was it not for H.D. Richardson who gathered the dogs he could find, and the subsequent breeding programs of Sir John Power of Kilfane, Sir John, Mr. Baker, and Mr. Mahoney, breed numbers might not have been recovered. A club founded to look after the interests of the breed was formed in 1885, the same year twelve hounds were entered at a dog show in Dublin under “Foreign Breeds.” The Kennel Club didn’t recognize the Irish Wolfhound until 1925.
Between food shortages and war conditions, WWII nearly destroyed the breed as alarmed owners and breeders put down their wolfhounds to spare them starvation. The only breeding done at this point was mostly in Ireland, and Irish breeders opened their doors to many hounds that helped safeguard the breed’s future.
Though the breed is doing better, today the Irish Wolfhound is listed on The Kennel Club’s Vulnerable Native Breeds list.
Irish Wolfhound image by German illustrator, Willy Bär, from a vintage book published in 1975 and available at FrenchOldPapers here.