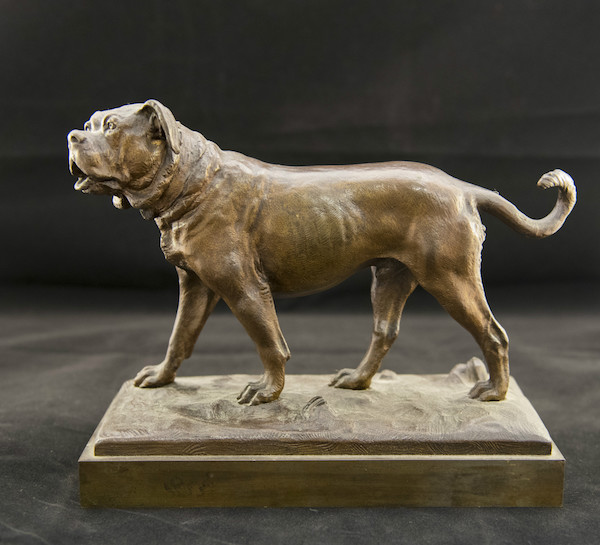 On the occasion that the handler of a Boerbole was asked by a spectator the name of his breed, he replied, “South African Mastiff.” Why, we inquired of him a few minutes later, did he not say, “Boerbole,” to which he replied that he lacked the time to repeat himself to a question asked more out of curiosity than a desire to learn.

Inwardly, we thought this was a disservice to both spectator and breed, though as Puli owners, we more than understood his point of view. But we digress.

The names of many breeds include the word, “mastiff” preceded by place of origin or culture, and those breed names imply a large dog: Tibetan Mastiff, Argentinian Mastiff, Spanish Mastiff, Abruzzese Mastiff….you get the idea. As common as the word “mastiff” is, however, the origin of the word is not really known with certainty.

That “mastiff” is an old word known to have existed in England for more than two thousand years.  It was used for the first time in a manuscript on forest laws in the thirteenth century (and the document still exists). After that point, one could find the word in its various incarnations, but no clue as to when the word gradually changed from “mastyf”, for example, to mastiff.

Some think the name probably derived from the French word “Mastin” though there is debate over whether the word meant ‘watchdog” or “great cur,”  (the modern French version is “mâtin”).

Others think that the Latin word, “mansuetus,” meaning “tame” or “domesticated” is the origin of the Mastiff’s name, and before that, from the Medieval Latin mastivus from Vulgar Latin “masuetivus,”  the word eventually morphing into “mastiff” via Old French and Middle English. Still others claim the word evolved from the Anglo-Saxon word “masty”, meaning “powerful.”

The site, wordpandit, however, simplifies things by defining mastiff as “big furry dogs.”

For hundreds of years, it’s been widely believed that the Molossus, a Mastiff-type dog,  was ancestral to all other European and Near-Eastern breeds in the family.  The Molossus got its name from the Molossi people who lived in northwestern Greece. The dogs they bred to guard their flocks, homes, and use in battle had a reputation for being fierce, loyal and brave. It’s believed these dogs were the early beginnings of mastiffs. That is speculative since no one really knows the Molosser breeds’ true origin. In fact, some have questioned if there is a connection between the Molossus and Mastiff, some suggesting that the Molossus was anything from a fleet-footed coursing dog to a medium-sized, general purpose working dog.

Debate will likely never end, and so we like to mention folklore since who can argue with legend?

According to Greek mythology, Molossers descended from Laelaps,  a dog predestined to always catch his prey. Given to Europa by Zeus, then later given to Kephalos of Athens, Laelaps was given the task of hunting down and catching a beast known as the Teumessian Fox that was savaging the countryside. However, the fox’s role, too, was predestined, and his destiny was to never get caught. After much thought, Zeus decided nothing could be accomplished by having a dog that always caught his prey chase a fox that would never be caught. So he turned them both into stone and placed them in the sky. Laelaps and the fox make up the Constellations of Canis Major and Minor. However, before Laelaps was turned into stone, it’s said he sired the Molosser race of great dogs.

And there you have it.