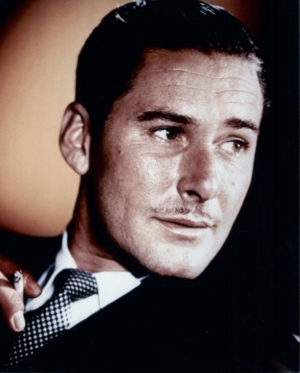 When Theodore Flynn, a world renown marine biologist, and his wife, Marrelle, an adventurous young lady from “seafaring folk,” had a baby boy in 1909, they named him Errol Leslie Thomson Flynn.

Growing up in Tasmania, Australia, their boy was sent to the best schools available—and expelled from virtually all of them. He was too rambunctious, too restless, and too rebellious, and could always be counted on to find trouble. A sexual encounter with the school’s laundress got him expelled from one school. Who knows what mischief he’d gotten into at the others.

In his late teens, young Flynn set out to find gold in Papua New Guinea where he worked as a plantation overseer and gold miner, but mostly, he worked in a series of short lived odd jobs that included the positions of sheep castrator, police constable, sanitation engineer, treasure hunter, shipmaster for hire, fisherman, and soldier. In his personal life, his natural athleticism, eye for the ladies, and dashing good looks were a dangerous combination of traits, and he was typically one jump ahead of the law and jealous husbands.

Accounts vary as to how Flynn landed a bit role as Fletcher Christian in the Australian movie shot in 1933, In the Wake of the Bounty. According to one source, Flynn had been seen by the filmmaker in an article about a yacht wreck that Flynn had been in, but other accounts say he was discovered by cast member. Though the movie wasn’t a strong success, it gave him Flynn the idea of becoming an actor even though it was obvious to everyone, including Flynn himself, that he didn’t have strong acting skills. Determined to succeed, Errol left for England where he trained at the Northampton Repertory Company for seven months. Unsurprisingly, he was dismissed after a dispute with the stage manager. Her threw her down the stairs.

After that, Flynn was cast in different performances on stage, art-house cinemas, and movies, but nothing major. Still, Flynn’s irresistible charisma won him the lead role in Murderer at Monte Carlo where he’d been spotted by an agent. He signed a contract with Warner Brothers and eureka!, Flynn was Hollywood bound.

He was an immediate sensation. He personified the cavalier adventurer in a string of immensely popular films for Warner Brothers, most often co-starring with Olivia de Havilland in such classics like “Captain Blood” and “The Adventures of Robin Hood.” He and de Havilland appeared together in nine movies and became one of Hollywood’s most popular romantic movie pairings; both had admitted that there was chemistry between them backstage, but nothing ever happened because Flynn was marriage to the French actress, Lili Damita. They divorced in 1942, the same year that Flynn became an American citizen and applied to join the armed services.

Several health problems found him unfit to serve, including an enlarged heart that had given him at least one heart attack. He had lingering chronic tuberculosis, recurrent malaria he’d contracted in New Guinea, and chronic back pain for which he regularly took morphine, and later, heroin. He also had six separate STDs, no doubt linked to the 10,000 women he’d estimated he’d slept with in his lifetime.

Flynn became famous for his fast-paced and well-choreographed sword fights, and some consider Flynn to be the greatest film screen”swashbuckler” of all time. His striking good looks and hedonistic lifestyle, however, didn’t serve him well.  A penchant for alcohol, drugs and brawling aged him prematurely. He’d had several scandals involving young ladies, and by 1950, his best days were behind him both professionally and personally. Dropped by Warner Brothers in 1952, Flynn roamed the world in his yacht making substandard films abroad, as well as one short-lived television show, “The Errol Flynn Theater.”

Near the end of his life, he returned to Hollywood where he’d been discovered, but this time around he played drunks and washed out bums – not far from the truth, some thought. He brought a poignancy to his performances that hadn’t been there during his glamorous glory days.

Flynn had been married three times and was the father of four. His son, Sean, was a photojournalist who disappeared in 1970 while covering the war in Southeast Asia. He died in 1959 at the age of 50, but even Flynn’s death was tinged with salaciousness when he reportedly died in the arms of his teenage girlfriend, Beverly Aadland, a former chorus girl whom Flynn had allegedly begun dating when she was only 15.

By now, you’ve recognized Errol Flynn, and everything written here so far has skirted his other relationships; he was a devoted animal lover and had an astonishing lifelong menagerie of dogs, horses, cats, monkeys, parrots, goats, pigs, a fox, a lion cub, his peacocks, his sheep, and his snakes.

We don’t know if Flynn’s heart was bruised by many women, but certainly his heart was broken by the death of Arno, his miniature schnauzer in 1941. ”The little mutt,” as Errol affectionately called him, went with his owner to premieres, parties, restaurants and clubs. On one occasion, a bartender, tired of Arno lifting his leg outside the bar, screwed an electrified metal plate to the spot. When Flynn discovered what had made Arno yelp in pain, he seized the man by the back of the neck, dragged him outside, and, as the story goes, made him relieved himself on the same spot. Errol always maintained that the best friend he ever had was Arno, but the little dog was tragically lost when he was presumed to have gone overboard on Flynn’s yacht.

It was while Errol was on a hunting in Africa with Ernest Hemingway that he was exposed to Rhodesian Ridgebacks. He purchased his first Ridgeback from an English breeder in the 1930’s and became not only the first person to import the breed into the United States, but Errol Flynn was also the first breeder of Rhodesian Ridgebacks in the United States. He reared them on his Hollywood ranch in the 1930s, though sadly, the bloodline is now extinct. See a photo of Flynn with his Ridgebacks at a benched show here.

Breeding and showing them gave Errol Flynn a lot of pleasure, and his dogs were winners in the conformation ring. According to the book, “‘Your Family Dog” by Maxwell Riddle, Flynn helped popularize the breed in the United States.