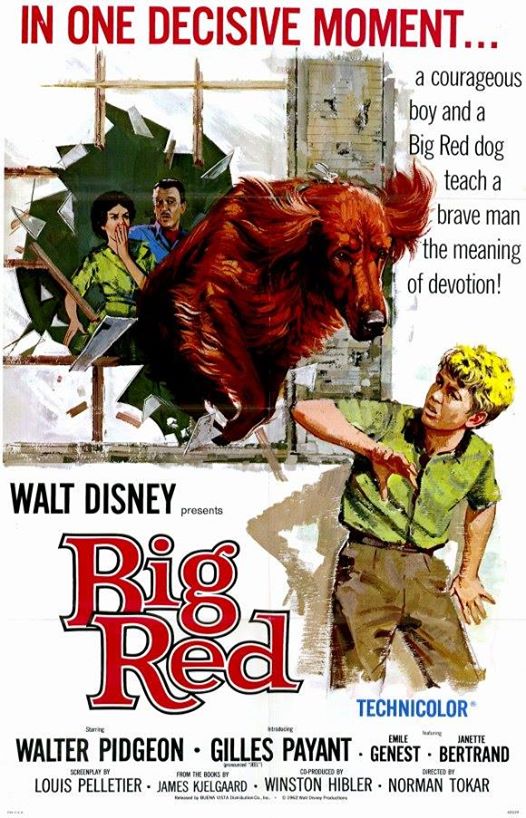 For many of us, our first introduction to the Irish Setter was the 1962 Disney movie, “Big Red” based on a book by Jim Kjelgaard. The real name of the dog that portrayed “Big Red” was “Am/Mex Champion Red Aye Scraps, UD” (call name: Scraps), an irony since both the dog’s real name and his character’s name featured the word “red” (maybe not all that rare in the world of Irish Setters at the time).

In 1963, Scraps, who was trained for the role by William Koehler, won the animal equivalent of an Oscar, The Patsy Award, for his part in the movie. He did have an understudy for the film, Ch Red Arrow Smooth Sailing, another show dog owned by the same owners as Scraps. The supporting “canine cast” included a Setter named, “Haleridge Princess Cenna” who portrayed Big Red’s mate, “Molly,” and 60 puppies used for the whelping scenes in the movie during the ten months it took to film. They were provided by the Haleridge kennel of James and Evelyn Hale.

Though Kjelgaard actually did own an Irish Setter named, “Sheila” who’d been sent to him by Rudd Weatherwas (of Lassie fame), Sheila was not the model for “Big Red.” That honor went to a black setter mix Kjelgaard knew as a boy.

“Big Red” was the first in a trilogy that involved Irish Setters, and in all of them, the author, Jim Kjelgaard, imparted a moral code of loyalty, courage, perseverance, and trust between dog and owner.

Kjelgaard, a keen hunter and fisherman, didn’t live to see the movie based on his book. He committed suicide in Phoenix, Arizona, in 1959, after suffering for several years from chronic pain and depression.

For more on “Big Red,” including some great photographs of the actual dogs, read this.

One thought on “Big Red”

The Frenchie and the Titanic ...

The Frenchie and the Titanic

This irresistible breed was first bred in Nottingham in 1800s by lace makers who wanted to create a small, miniature version of English Bulldog; at first, some called these dogs, “Toy Bulldogs.” In the 1860s, the craftsmen, now casualties of the Industrial Revolution, moved to France, and settle...

They were born of a human enchanted into the form of the Irish Wolfhound.... ...

Irish Wolfhound: “Gentle when stroked; fierce when provoked:” Old Irish proverb. In medieval Ireland, there were bands of landless and lawless young people known as “kerns.” Some were young aristocrats who hadn’t yet come into their inheritance of land, and mostly they were young men, but ...