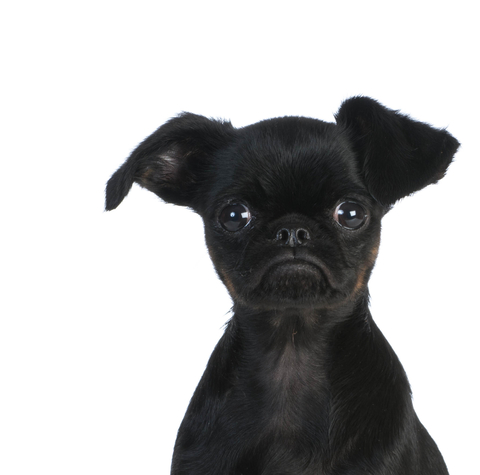 The “Street Urchin of Belgium,” aka the Brussels Griffon (known in Belgium as the Griffons Bruxellois) comes in a rough coat and a smooth coat, and allowable colors per the current AKC standard are red, black and tan, “belge” (black and reddish brown mixed),  and black.

Why was the coat and color variety ever deemed a DQ, and what changed the minds of those in the parent club in 1990?

At this point we freely admit to not having definitive answers to either question, and we invite breed veterans or experts to give us their insights. For now, what follows is a theory.

In 1889, the Club du Griffon Bruxellois was established in Brussels, and it was at that time that the smooth was recognized as a separate variety under the name, “Griffon Brabancon.”  It is a stated fact that the smooth-coated variety was a direct result of the introduction of the Pug, and perhaps more specifically, black Pugs (among others) bred with a Belgian stable dog known as Griffon d’Ecurie.

In an article written by Anne Catterson back in 2018, the author does a lovely job of explaining that certain traits are determined to be faults when a particular feature is a throwback to one of the older foundation breeds used to create the breed in question. She cited as an example the disqualifying white spot or blaze on a Brussels Griffon. She wrote: “This trait is difficult to erase once embedded in a breeding program. It hails from the English Toy Spaniel, and possibly from an English terrier, two breeds that were behind the creation of the Brussels Griffon. While the English Toy Spaniel may have contributed mightily to the characteristic dome of the head, breeders must be careful not to allow the white of the Blenheim or Prince Charles to re-enter the gene pool, along with the dome.”

We’ve read that in some countries, “true” Brussels Griffons are regarded as only those that are red rough coats, the black rough coated version considered to be Belgian Griffons, and all smooth-coated varieties being deemed Petit Brabancons. Perhaps in 1960, the black smooth coated Brussels Griffon was thought to be a little too much of a throw back to the black Pug, but if so, what happened in 1990 to change anyone’s mind? When we asked around, there was speculation that fanciers with all black Griffs pushed for a standard change. Perhaps enough time had passed when an atavistic throw-back was less likely?
Griff people, share what you know?
Image: Black smooth coated Brussels Griffon puppy by ©Willeecole/Dreamstime.com

4 thoughts on “Black, Smooth, and Once DQ’d”