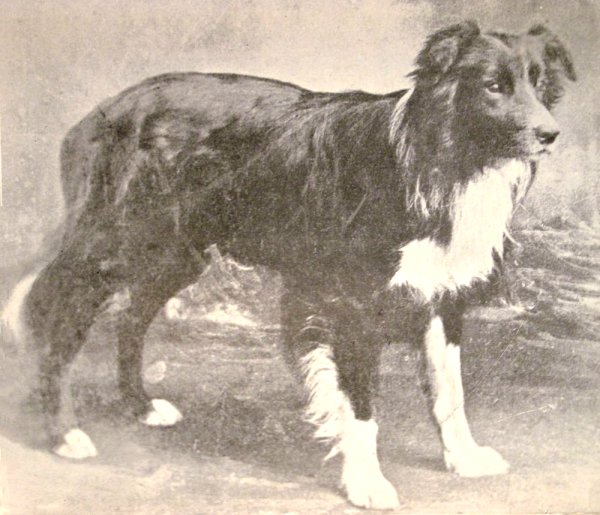 Many Celtic clans in ancient Britain were pastoral, and a pastoral life included keeping sheep. To help move the flocks, various sheepdog types developed over the years, and out of them came the Welsh Hillman, the Black and Tan, Scotch Collie, and Welsh Sheepdogs, breeds that are largely unknown today. Other breeds, however, are well known to us, and beloved: The Old English Sheepdog, the Bearded Collie, Collie, and Sheltie. Dogs that were developed on the land along the English and Scottish borders were the foundation dogs of the breed we know today as the Border Collie.  Until the 19th century, however, these dogs were called Working Sheepdogs. Several 19th century publications mentioned dogs with the description ‘Collie’ or ‘Colley,’ the word possibly coming from the old Celtic word for “useful.”  The breed’s present name, Border Collie, wasn’t given to it until 1915 when James Reid, Secretary of the International Sheep Dog Society in the United Kingdom used the term “Border Collie” to distinguish them from other dogs registered with the Kennel Club’ as “Collies.”

Based on illustrations, some of these “collies” looked more like the current Scottish Shepherd, but others looked very much like the Border Collie of today. The birth of a dog named, “Old Hemp” in 1893,  ushered in the current Border Collie type, in large part because Old Hemp was a prolific stud dog having sired over 200 male puppies and an unrecorded number of bitches. Type was furthered solidified with a dog born in 1937, Wilson Cap, who not only fathered 188 registered dogs of his own, but was the direct ancestor of “Wiston Cap” whose image is on the International Sheepdog Society badge today.

There has been a wee bit of friction within the breed between those who oppose the use of Border Collies as show dogs, and those who don’t.  The Kennel Club in England, which accepted the breed in 1976, has what seems to be a reasonable approach: It introduced a working test to safeguard and maintain the breed’s essential working ability, and only Border Collies that have passed this test and earned three Challenge Certificates (for conformation) are awarded a champion title. For those who find conformation competition unimportant, there are a myriad of herding trials which reward the working ability of the breed, as well as organizations such as the American Border Collie Association which fosters the breeding and training of working Border Collies, and the promotion of stockdog trials.