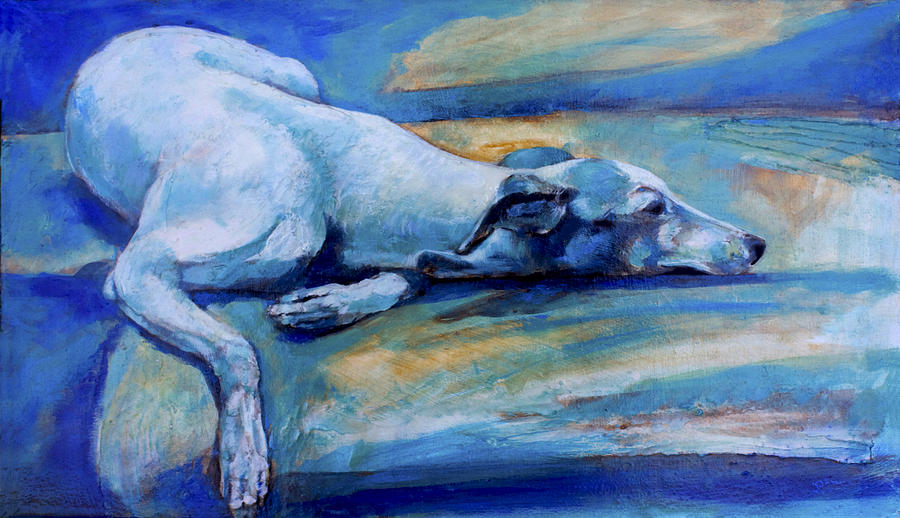 While debate continues about the true origins of the Greyhound’s name, at least one etymologist thinks he has the answer for the Whippet‘s name. He suggests that the ultimate-ultimate origin is the word, “via,” which anyone who took Latin in school (six years of it, here) recognizes as the word for “road.” It’s the root of words like vibrate, convey, wiper – – – and whip. By default, the last word came to be associated with things that moved fast, nimbly and quick.

We’re not so sure. A different source traces the word to the early 17th century from the partly from obsolete word meaning, “move briskly.”

Yet another source, a historian and archivist whom we admire, Bo Bengtson, wrote, “Although the word Whippet (or corruptions of it) was recorded as early as in the sixteenth century, it did not necessarily mean then what it does today. The Oxford Dictionary of English defines a Whippet in 1550 as “a lively young woman; a light wench.” Later the word came to be used for a “nimble, diminutive or puny person,” by 1610 for “a small breed of dog,” and as late as 1841, the Whippet was described as “a dog bred betwixt a greyhound and a spaniel.” Around the same time, on the European continent a school of artists known as les animaliers were sculpting exquisite bronzes of Whippets and Italian greyhounds.” We think this excerpt is from an article, “The Whippet – An Authoritative Look at the Breed’s Past, Present and Future,” published by Kennel Club Classics, 2010.