Back in 2013, the Boston Calling Music Festival got its start at City Hall Plaza in downtown Boston as a three-day, multi-stage festival. It took place twice a year in May and September at City Hall Plaza, and attracted up to 22,000 fans by featuring performances by some of the biggest names in music, comedy, film, and art.  In 2017, it drew 40,000 festival goers, and would have continued its upward trajectory had it not been for 2020.

There will be a time in the future when all anyone has to say is, “2020,” and everyone will nod their head in understanding. Weddings, celebrations, graduations – indeed most public events were upended in the year of the pandemic. The festival wasn’t immune. After several weeks of consultation with local and state authorities,  organizers made the tough decision to cancel Boston Calling for 2020, and though disappointed, everyone understood.

What won’t change is the festival’s logo, a nattily dressed Boston Terrier. The dog has had several iterations since 2013, and perhaps one of the most memorable among them was the 7′ tall high-density polyurethane foam sculpture created by Sean Roach in 2018. Through a painstaking process of shaping, cutting out, and coating with epoxy, followed by sanding, painting, and airbrushing for 10 to 12 hours a day, the festival had its logo-come-to-life thirty-five days later. 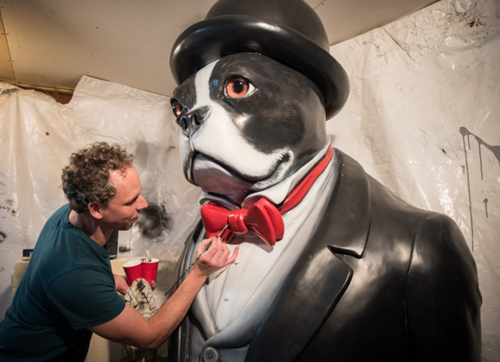 So why a Boston Terrier. Well, this is Boston. Boston University made the breed is mascot 1922, and in 1979,  it became the State Dog of Massachusetts. What else would the mascot be but a Boston Terrier?