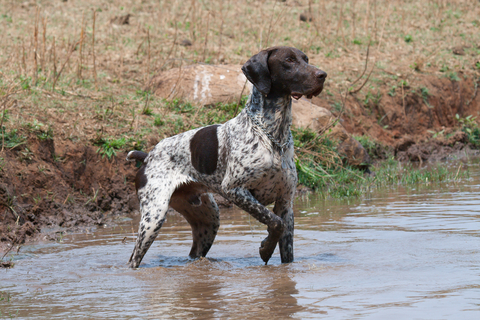 Thin, supple, and graceful. Most of us would love to be described that way (we were thinking that very thing just before we walked into a wall). They are three of the words that define “lithe.”

Rhythmic gymnasts are lithe. Female powerlifters, not so much. Both athletes require strength, but flexibility, agileness, and dexterity serve a gymnast especially well.

Would it surprise you to learn that “lithe” is a word that shows up in the standards of several breeds?

No surprises there. These two sighthounds are poster dogs for chiseled elegance, and yes, what we might mentally picture as “lithe” dogs.

“Lithe” is also an understandable trait in some sheepdog breeds that rely on quick starts and fast turns:

What made us curious about the word “lithe” as it pertains to our dogs was reading about the German Shorthaired Pointer in which a “smooth lithe gait is essential.”  After watching a video we found on You Tube, we thought, “Yeah, okay, this dog is lithe,” though admittedly, you have only a nanosecond to catch it. The steps come after the dog is stalking the rabbit (which emerges uncaught and unscathed) and just before the GSP breaks into a tear….

We thought that in the end, a dog that relies on its athleticism is often “lithe,” but we were wrong because the GSP is the only sporting breed to include the word in its standard, and there are no working and non-sporting breeds that include the word in their standards even though we can think of a few breeds for whom the word could apply. And in case you were wondering, there is one toy breed that can be included in the conversation:  The Toy Fox Terrier’s “lithe muscular body has a smooth elegant outline…”

One wonders why “lithe” isn’t used for more breeds….