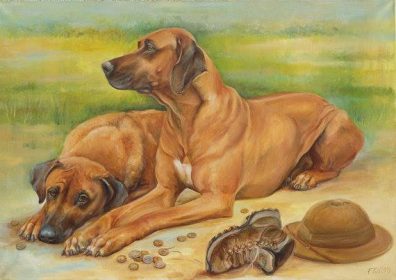 The Rhodesian Ridgeback is the only breed of dog in the world that can keep a lion at bay for a hunter to dispatch – and live to bark about it.

Ridebacks are a tough, versatile breed. When South African settlers needed a dog that could flush birds, pull down a wounded stag, guard the farm and withstand the rigors of the African bush, they developed the Ridgeback. In addition to keeping lions at bay, there have also been reports of Rhodesians having been trained to point upland game and retrieve game and fowl, but we’ll defer to the breed experts to weigh in on that.

We’ve read that Europeans exploring the Cape of Good Hope interior encountered Hottentot tribes which kept domesticated dogs distinguished by hair on their spines growing forward. It’s never been definitely determined whether the peculiarity of the Ridgeback’s ridge originated in South Africa, or on the island of Phu Quoc, and perhaps one of our Ridgeback owners can weigh in on this, as well.

We don’t have permission to share an interesting chart we found on a website illustrating acceptable and unacceptable ridge patterns, but you can visit this link to see it at the bottom of the page:http://www.rrcus.org/club/breedinfo/elaboration.htm