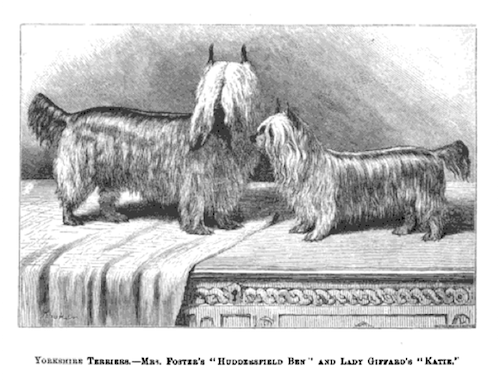 Until the late 19th century, the Yorkshire Terrier was known (and exhibited in a show ring) as the “Broken Haired Toy Terrier,” “Rough Coated Toy Terrier,” and “Broken Haired Scotch Terrier. In the first studbook, early breeders registered their dogs in Class XXXII – Broken Haired Scotch and Yorkshire Terrier dogs and bitches, and an impressive 76 dogs were registered in it! Fifty two of these dogs were owned or bred by known early Yorkie fanciers. The second classification was XL Toy Terriers (Rough and Broken Haired), and 45 dogs were so registered. Twenty-five of these dogs appear in early Yorkshire pedigrees, some of these even registered their dogs as being sired by Huddersfield Ben, the dog universally acknowledged as the foundation sire of the Yorkshire Terrier breed. Ben died too young when an accident claimed his life at the age of six, but by the time of his death, he’d won over 70 prizes at dog shows and was an exceptional ratting in contests.  His great grandson, Ch. Bradford HarryThe first Yorkie to become an AKC Champion.  It’s said that to this day, every Yorkshire Terrier descends from Huddersfield Ben through ten of his sons and one daughter. As always, we defer to breed experts to confirm this.