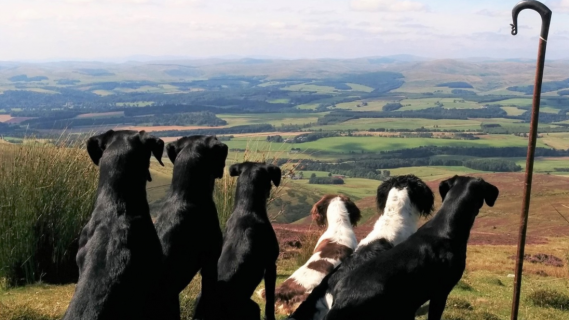 A certain amount of reading on a breed will inevitably expose the reader to names used as adjectives when referring to that breed:  Harlequin Great Danes, Oorang Airedales, Prapso Lhasa Apso, and so on. Without further research, one is left wondering if the descriptive word is a coat pattern or length (as in the Harlequin Great Dane and prapso Lhasa Apso, respectively),  a size (as in the Oorang Airedale Terrier), or something else.

In the case of Labrador Retrievers, one may encounter the name, “Buccleuch Labradors,” and without context, a reader might scratch their head and speculate. Students of the breed, however, will recognize the name as belonging to the Duke of Buccleuch, one of the first people to import dogs from Newfoundland to hunt over on his estates in the Scottish Border. The other aristocrat who imported the dogs was the Earl of Malmesbury.  The kennels of Buccleuch and Malmesbury – and their cooperative breedings – were pivotal in developing, refining, and establishing the modern Labrador Retriever in 19th century England. In fact, the first two entries in the Stud Book of the Duke of Buccleuch Labrador Retrievers were dogs the 6th Duke of Buccleuch had been gifted by the 3rd Lord Malmesbury. These two dogs were bred with bitches carrying the bloodline of dogs imported originally by the 5th Duke. The breeding developed a strong bloodline, and all Buccleuch Labradors trace back to the first imported dogs.

Certainly the name refers to the Buccleuch kennels, but these retrievers had characteristics that “stamped” them as Buccleuch Labs. In the field, they exhibited a good nose, a tender mouth, intelligence, and a courageous temperament. In type, their heads were usually shorter than other Labradors; they also “wore” a thick double coat, grew the famous ‘otter’ tail, and were always black, for pure Buccleuchs threw only black puppies.

No Buccleuch dog was ever sold, but many were given to friends and relations. Also interesting is that this was a time when when retrieving dogs were routine interbred, but Buccleuch Labradors were systematically maintained. No dog was kept that couldn’t hold its own.

Buccleuch labradors were written into the fabric of the breed’s early history, but we err in speaking of these dogs in the past tense; Buccleuch Kennels is still operating at Chapel Farm and is home to many champion Buccleuch Gundogs (it’s also now the brand name for a range of feeds developed by David Lisett, the Duke of Buccleuch Gundog Trainer).  The Buccleuch Labradors are still being produced there, of course, but English Springer Spaniels and Cocker Spaniels have been added, and among them, they’ve have won multiple British and Irish Springer Spaniel Championships, and placed twice at the Cocker Spaniel Championships. More recently,  Lisett and Labrador Retriever, Buccleuch Xena (aka “Daisy”) won the 2017 IGL Retriever Championship. This was followed by a win in the first ever Scottish, Open Walked-Up Test for 30 A/V Retrievers organised by the North of Scotland Gundog Association in July of that year. They continued the tradition established by Munden Single, the ﬁrst of the breed to take a card at a field trial in 1904, and almost pure Buccleuch and Malmesbury breeding. So was Ch Flapper, the first Labrador to be placed in 1906.

Buccleuch Labs had challenges. The 7th Duke of Buccleuch died in 1935, and he hadn’t maintained the lines. World War II further impacted the kennels, and in 1960, only two bitches of breeding age remained. This was reduced to one bitch by the time David Lisett took on the challenge of reviving the line in 2003.  The proverbial “rest of the story” is well worth the read which you can do here. The future is looking up for Buccleuch Labs.