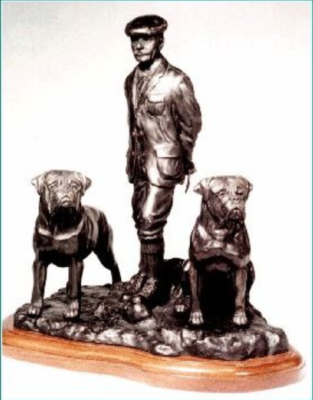 “…His name was ‘Grumbo’…I saw the back of one of the men, his figure stationary, his hands held high above his head, and Grumbo, my faithful, sagacious dog, a yard in front of him, barring his path, couched like a lion in the act to spring, his eyes, not his teeth, fixed on the fellow’s throat. The menace sufficed, he stood in terror…and in this position I presently seized him by the collar.” From ‘Recollections — Poachers’ by  Grantley Berkeley, 1850.

If we had included the first line of the quote, “The first dog I could call my own was a black one, of a cross between the bull and the mastiff…” you would have correctly deduced that “Grumbo” was a Bullmastiff, a rather extraordinary breed. It’s quite possibly the only molosser breed that won’t use the bite strength it inherited from 60% of its ancestry, the Mastiff, a breed regarded as one of the top 15 breeds with the strongest bite as measured in ‘pounds per square inch’, or ‘psi’.

At this point, allow us to explain PSI, and why one shouldn’t bet the farm on its accuracy in dogs.

PSI (pound per square inch) is a measured result of pressure applied over one square inch of a pound. This form of measurement isn’t exclusive to dog bite strength, it’s used to measure everything from tire pressure to atmospheric sea level pressure. That said, the strength of the bite of a dog breed can’t really be measured with any accuracy because experts say a dog can’t be taught to bite with consistent force time after time after time –  it’ll be different each time it’s measured – and each dog will have a slightly different measurement. Still, some people like to put numbers to things, and most sources seem in agreement that a Mastiff has a bite strength of 552 to 556. A human, by comparison, averages 120 pounds bite force.

But we’ve digressed from the Bullmastiff.

As we said, it’s probably the only molosser that won’t use the inherent strength of his jaw to bite and injure randomly, and this is because of its breeding. Two hundred or some odd years ago, British estate Gamekeepers needed dogs to help them with the problem of poachers, a costly problem for landowners. They needed a dog with an immense capacity for work because sometimes, dog and gameskeeper had to follow poachers (and their dogs) for hours or days, and they had to do it in total silence through all manner of weather, and through water, over gullies, hills or ravines. The dog had to be able to wait for long periods of time, and then the dog had to be able knock down and immobilize the thief (even as the dog was likely being bitten by the poacher’s dog) –  but not harm him.

A Bullmastiff was expected to use his strong body to knock down the bad guy, and keep him on the ground. Since the punishment for the crime of poaching was hanging,  poachers were dangerous men not adverse to taking risks, and certainly not above using every trick in the book to escape, including killing the dog. In fact, poachers made a high priority of killing Bullmastiffs.

The American Bullmastiff Association has a marvelous video on its website which we were able to share from You Tube (see below).  Posted by Kennel Librrani located 45 minutes west of Copenhagen, Denmark, the creative video recreates “a day in the woods” using the help of friends, and a Bullmastiff named CH Librrani’s Astrox. Be sure to watch it all the way to the end for some fun “behind-the-scene” still photos:

Bullmastiffs were meant to pursue and corner a thief, not maul them, because this was Forest Law, and there needed to be a living person to prosecute.  The 19th century dog writer, “Stonehenge,” wrote of the Bullmastiff:“…there is probably no variety of the species which combines so much strength and power of doing mischief with such docility and amiability, and hence he is, par excellence, the keeper’s dog…every one of experience knows that many keeper’s dogs, which are fully half bull, are perfectly under control even with severe provocation…”

Image: “Bullmastiff – The Gamekeepers Night Dogs” in Cold Cast Bronze is available at Dannyquest Collections which feature the creative design concepts of Dee Burdick, owner, with sculptures by Tony Acevedo and Circe as well as several other artists