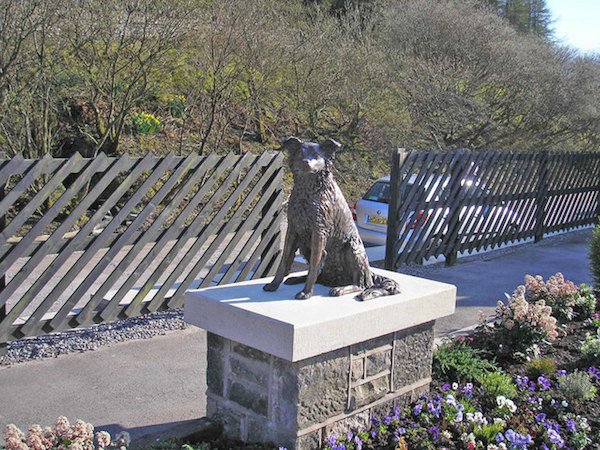 Back in 1990, forty-one year old Graham Nuttall went for a walk on a January day with his Border Collie, “Ruswarp,” but didn’t come home. His neighbors in Burnley, a market town in Lancashire, England, became concerned, and concern grew into alarm when a week later, he was still missing despite searches.

Months later, a hiker, David Clarke, found Graham Nuttall’s body by a mountain stream, and next to him was 14-year-old Ruswarp who had stood guard over his owner through eleven winter weeks of snow and rain. Ruswarp (pronounced “Russup”) was so weak that he had to be carried off the mountain.  For all the care given him by a local vet, Rruswarp died shortly after attending his owner’s funeral.

Nutall had been an active member of the “Friends of the Settle Carlisle Line,” a group that opposed the closure of the Garsdale railway station in the 1980s.  A petition objecting to the closure was signed by 32,000 people and one canine, and that dog was Ruswarp who had his say with a paw print.

In 2009, a lifesize bronze sculpture of Ruswarp was unveiled at the Gardsale station. Created by the artist, JOEL, the bronze was installed at the railway line which thriving once again. Ruswarp’s image symbolizes not only the successful fight to save the line, but also the loyalty of a dog.  Today, you can see Ruswarp’s sculpture at the railway station as if he is still helping his owner prevent the station from closure.

For anyone thinks that dogs like the Skye Terrier, Greyfriars Bobby, or the Akita, Hachi, are a thing of the past, remember Ruswarp.