Judd was a well built, high stationed chap with dark brindle hair with a white blaze. Oh and he was a dog. His head was square and blocky, his mouth about even, and at some thirty-two pounds, Judd was quite a bit heavier than his future descendents.

His first “bride” was Gypsy, a white, low and square young lady who came in at twenty pounds. Out of their union came Evert, a strong, sturdy boy who, like his mum, was low stationed, but who had inherited his dad’s mouth and coloring.

Evert continued the family line when he was bred to Kate, a golden haired lass (literally) with a fairly short head, a straight, three-quarter tail, and a comparative light-weight like her “mother-in-law.”

Though we have changed the names to keep things interesting, we doubt we’ve fooled any Boston Terrier fanciers who will have recognized their breed’s foundation dogs. Judd was really “Judge,” aka Hooper’s Judge, the ancestor of almost all true modern Boston Terriers. He was a cross between a Bulldog and an English Terrier, and when Judge was mated to “Gyp” (whom we’ve called Gypsy), they produced Wells’ Eph (or “Evert”).  Eph was bred to Kate, seen in pedigrees as Tobin’s Kate, and it was these four dogs from which the Boston Terrier came. A couple generations after Eph and Kate,  a pup was born named, “Bernard’s Mike,” and he is considered the first true Boston Terrier.

From 1900-1950, the AKC registered more Boston Terriers than any other breed of dog;  over 90 thousand Bostons were registered with the AKC between 1921 and 1934,  and almost 500 of them earned championships. That said, it was a bumpy ride to AKC acceptance.

Some thirty Boston fanciers organized themselves in 1889 to form a club. They had 75 dogs listed in their Stud Book, and three generations could be traced back, but the consistency of these first dogs was described as “uneven,” with weights ranging from 10 to 35 pounds!  The early name that fanciers gave their breed, the American Bull Terrier,  did not go over well with the Bull Terrier Club, nor with Bulldog fanciers, both of whom felt the name was too similar to the names of their respective breeds. 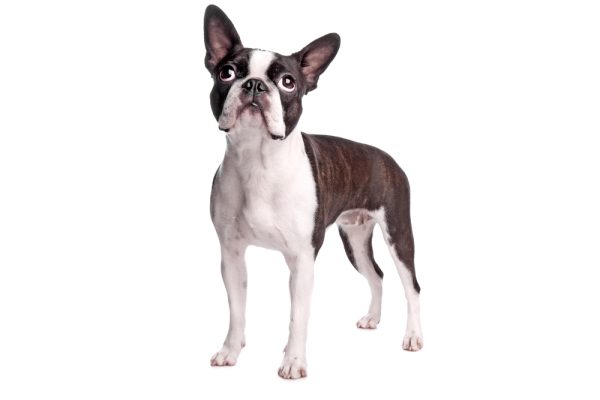 Adding insult to injury, many felt that this newcomer was essentially a mongrel with no place in purebred competition. Because the breed had been established over a relatively short time, the AKC wasn’t convinced the dogs would breed true to type. Even within the club, there was a lack of consensus on what breed type should be. Experts of the day simply regarded the breed as fad that eventually would burn out.

It didn’t. But the comment of one member of the AKC’s studbook committee at the time, James Watson, may have reflected the sentiments of other members when he said, “For my own part I cannot bring myself to favor admitting this dog. I would like to admit the club, but it appears that we have to take the dog, too. The question for this club is whether it is a proper breed to admit to the studbook, and I cannot say that I am in favor of admitting it.”

As they say, “you can’t keep a good dog down.” The Boston’s own charm (and the club’s perseverance) won the day. Kennels sprang up, as did specialty clubs.  Though the breed, as a whole, had a ways to go before breed type was cemented, it did, of course, happen. The early breed club officially changed the breed’s name to Boston Terrier, and after many applications, the AKC recognized the breed as the Boston Terrier in 1893. Today we know this “American Gentleman” for being a clean cut, short headed breed with soft dark eyes that melt us on contact.

If you liked reading about the Boston’s early days, buy us a cup of coffee!