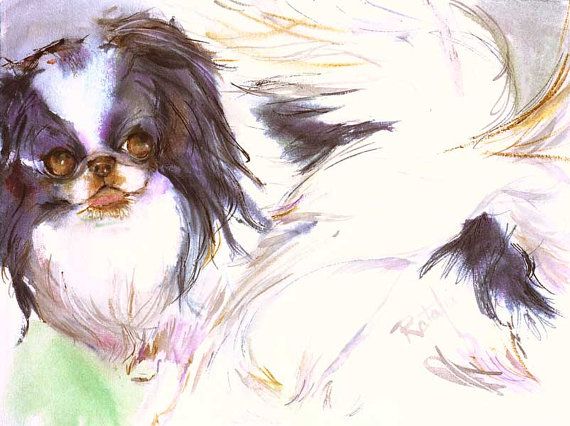 The word, “imperial,” shows up in a couple of toy sized breeds, and in this post, we take a look at how differently the word appears.

The origin of the Japanese Chin isn’t Japan, but China. According to the Japanese Chin Club of America, it was surmised that at one time, the Japanese Chin and Pekingese were the same breed with “the Pekingese having been bred out to create the short, bowed-legged, long-back, pear-shape bodied breed of dog known today.”  The Chin was believed to have been kept essentially pure, but patterns emerge when one researches Far Eastern works of art dating from the 17th to 20th Century. From the club’s website:

In this instance, “imperial” is a historical reference to the ancestry of the ancient and marvelous Japanese Chin, so named (possibly) for the ladies of the Imperial Palace whom the dogs accompanied.

Conversely, the Chinese Imperial refers to a tiny breed not recognized by the AKC, nor by any other respected registry that we could find – and for reasons we’ll get to further down.

The Chinese Imperial goes by many names including Princess-type, but when we write “teacup Shih Tzu,” you get the idea. The terms, ‘ teacup,’ ‘micro,’ and ‘tiny toy’ are typically used to describe a smaller version of a breed.

When certain Shih Tzu “breeders” bred the smallest dogs of their litters to downsize an already small breed, they bred outside the AKC breed standard. The standard calls for an ideal weight of 9 to 16 pounds in a mature dog, but a Chinese Imperial weighs half that. This dwarfing down for size alone results in soundness issues which can include hydrocephalus, liver shunts, patella luxation, and respiratory system problems. The “breeder” makes money, but the dog suffers.

There are those, namely Chinese Imperial enthusiasts, who insist that the Chinese Imperial has existed in China for centuries, and that there is a unique “imperial gene” that makes the dog a unique breed. They hold that because Westerners were unaware that their breed was distinct from the Shih Tzu early on, the two were lumped together and ultimately recognized as one breed, the Shih Tzu. As yet, we’ve been unable to find independent verification or evidence to support this claim.

A few sources looking to validate the Chinese Imperial cite the National Canine Association has having accepted it (the association hasn’t had activity on its Facebook page since 2014), and as well as the Chinese Imperial Dog Registry of America which appears to have been dissolved.  Novices to the dog world should know that self-named registries are often created specifically for a breed to suggest legitimacy when no other registry accepts it,  or are thinly veiled marketing devices for “breeders” to sell puppies.

Anyone considering a Chinese Imperial may want to reconsider and investigate. A good default position is to check with an established and respected registry of purebred dogs, among them the AKC, FCI, UKC, Canadian KC, the Kennel Club, (the AKC equivalent in The United Kingdom), the Irish Kennel Club, New Zealand Kennel Club, and the Australian National Kennel Council.

As an aside (and in conclusion), as of this writing, the word, “imperial,” does not appear in the breed standards of any AKC toy breeds.

Image: Japanese Chin by Carol Ratafia is no longer available, but custom orders may be requested at the artist’s Etsy page
https://www.etsy.com/shop/ratafia
www.facebook.com/pages/Ratafia-Studios/316696101676821