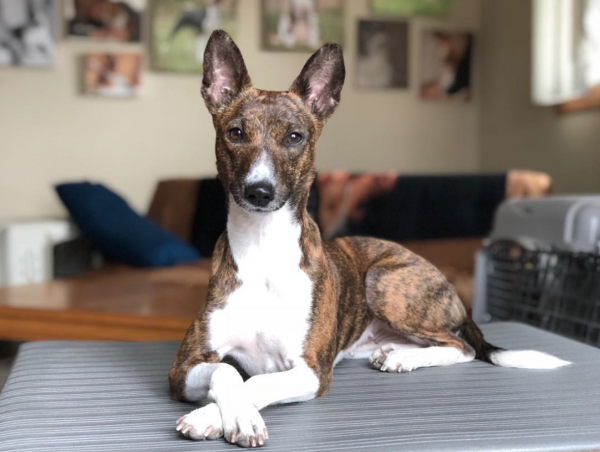 It’s a different way of looking at it.

Some breeds are named after the person who developed it: The Saint Bernard after St. Bernard of Menthon, the Gordon Setter after Alexander, 4th Duke of Gordon, the Jack Russell Terrier and Russell Terrier after Parson Jack Russell, and, of course, the Doberman Pinscher after Louis Dobermann.

Some breeds or varieties are named after an estate, such as the Blenheim Spaniel, a color variety of the Cavalier King Charles Spaniel that was named after the estate owned by John Churchill, the 1st Duke of Marlborough. The Sealyham Terrier was named after the Welsh estate of John Edwardes.

And then there are breeds that take their name from a location, i.e. the Australian Cattle Dog, the Caucasian Shepherd Dog, the Boston Terrier, the Lhasa Apso, the Bedlington Terrier, the Chesapeake Bay Retriever, the Bergamasco, the New Guinea Singing Dog, and more. This is a popular grouping! In 1995 when the AKC recognized 138 dog breeds, eighty-five of them were names with geographic aspects.

Not as numerous are breeds that come by their name in a singular way. The Dandie Dinmont Terrier is the only breed in the world that is named after a fictional character. The Basenji’s name has ties to a Lingala and Tshiluba term that means “native, inhabitant of the hinterland.”

We can’t forget breeds that take their name from a group of people: The Samoyed and Alaskan Malamute. A few breeds are named after their prey or the animal with which they’re associated: The Bulldog, Otterhound, Norwegian Elkhound and both Foxhounds.

There is a group that could be classified by the elements in which they functioned, and this is one category that doesn’t always first come to mind when classifying breed names. Cairn Terriers chased quarry between the cairns in the Scottish highlands. The Irish Water Spaniel, American Water Spaniel, and Portuguese Water Dog each call the sea, river, streams and lakes their “place of work.” Many breeds have “mountain” in their names for that is where they pulled carts, hunted, and watched over stock. These breeds include the Bernese, Greater Swiss, Bavarian, and Entlebucher mountain dogs, as well as the Mountain Cur, Montenegrin Mountain Hound, and Pyrenean Mountain Dog.

Much of the aforementioned information was gleaned from a marvelous paper written by Angela G. Ray, “Calling the Dog: The Sources of AKC Breed Names.” It’s an absolute crackerjack read that inspired us to create a post around it so that fans and students of purebred dogs have the opportunity to read it.