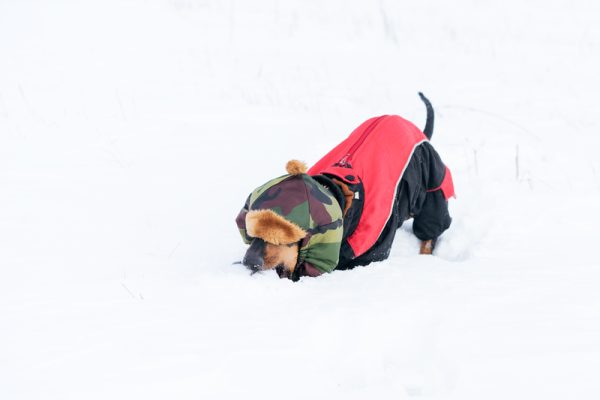 Unless it’s a flower bed in our yard, or our dog in someone else’s flower bed, we don’t think much about a dog digging in the dirt. That’s what dogs do, right?

Some breeds just seem driven to dig, and in this post, we focus on the Dachshund. In our view, the Dachshund is a spectacular example of form following function. Check out the Dachshies in the video clip below and see what you notice (no animals were harmed in the video, but some leaves fared poorly):

Stating the obvious is that these dogs are long bodied and short legged. Those short legs are result of a genetic condition called chondrodysplasia, a type of dwarfism selectively bred. The brevity of leg length keeps the dog closer to the ground and enhances the dog’s ability to catch and follow a scent; they also enable the dog to scramble through undergrowth and burrow into spaces that would be too tight a fit for a taller dog. If the game the dog is pursuing turns to attack them  (and a prickly badger often twice the size of the dog would do just that),  short legs allow the Dachshund to back up surprisingly fast.

If a Dachshund was a mechanical earth mover, its legs would be the arm cylinders powering the bucket –  powerful excavators ending in front paws slightly inclined outwards to better shove dirt off to the side.

Dachshunds have a low center of gravity, and a “keel” that merges gradually into the line of the stomach and extends well beyond the front legs. When you look at a Dachshund in profile, the lowest point of his breast line is covered by his front leg. As the dog digs furiously, he sometimes rests on his “prow” which you can spot in the video above. Much of the dog’s ability is a function of how its front end is built. Where the scapula and humerus meet, and where the humerus and the radius/ulna join is an angle, and it’s these angles that provide levers. On the levers are muscles that exert the forces that drive the dog’s body forward, important because bones involved in the dog’s front assembly aren’t articulated with the rest of the body by joints. They’re kept in place by ligaments and muscles.

Dogs with well-angulated front limbs can unfold those angles to reach far forward and push well back.  Dachshunds with poor angulation have to use more energy to cover the same distance as a well built dog. They tire out faster which puts them at a higher risk for injury, and since Dachshunds one of the top ten breeds used for hunting in Europe, soundness matters.

There is also a North American Teckel Club that encourages the breeding and training of Dachshunds used for their specific hunting capabilities in North America. We’ll be covering some of the unexpected ways the Dachshund is used in a hunt in another post.

One thought on “Can You Dig It?”