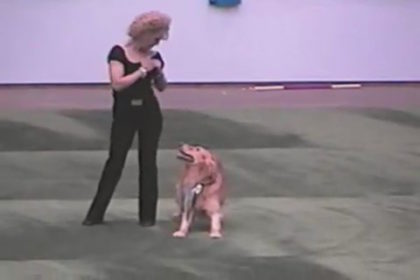 Yesterday, July 28th, was National Dance Day  – and yes indeedy, dogs can dance. In fact, there’s a discipline just for it. It’s called “Canine Freestyle” (also called “musical freestyle,” or “doggie dancing”) , and it challenges handlers to choreograph a musical program that will show off the team work they have with their dog.

While Wikipedia states that musical freestyle started in many places around the same time, other sources report that canine freestyle started in Canada in the late eighties with Val Culpin of British Columbia who worked on developing the sport of dancing with one’s dog.  Musical Canine Sports International was founded in Canada in 1991, but the following year, people started doing demonstrations in both that country, and the US.  Europe followed not long after. You can read a more detailed version of the sport’s history here.

There have been many fabulous pairings and routines, and we invite you to share your favorite in the comments section, but for us, the program that Carolyn Scott and her Golden Retriever, “Rookie” performed to the song, “You’re the One That I Want,” from the movie, Grease,” epitomizes the best of the sport. Carolyn and Rookei enjoyed a 15 year partnership, and it lead to them being called the most famous canine freestyle team in the world.

Before you watch their performance in the video below, a little background. Carolyn had suffered from polio as a child, and it left her shy, debilitated, and retiring. It weakened her right side, and damaged her self-confidence. As an adult, she grew too afraid to leave her house without the support of her husband, her high-school sweetheart.

Rookie was a submissive puppy who was fearful of people and tight places. He collapsed when confronted with anything new, and mostly lived in fear of people.

Together, Carolyn and Rookie bonded over music, and before long, the pair had some amazing dance moves.  More than that, their journey was a lesson in learning to read each other’s strengths, and forming trust that comes from consistent, positive reinforcement.

Sadly, Rookie passed away from cancer in 2008 at the age of 15, but he leaves a legacy. With well over 7 million hits, the video you’re about to watch is one of the most viewed “canine freestyle” videos of all time. The deeper into the routine, the more complicated the moves. It was taken during their performance at Crufts. Enjoy!

2 thoughts on “Carolyn Scott and Rookie”