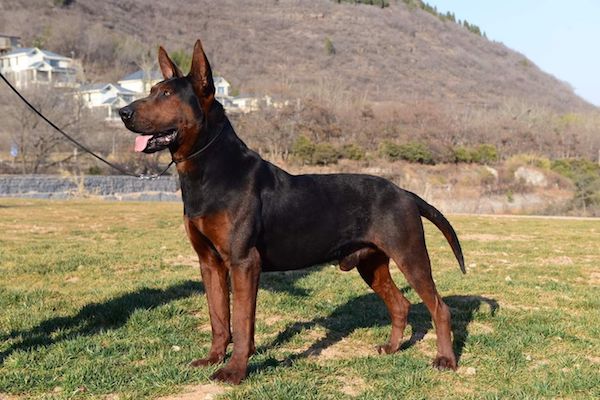 Its proper name is Laizhou Hong, but colloquially, this large, molosser type dog is known as the Chinese Red Dog, or China’s Red Dog.  Once very popular, other breeds became more favored when China relaxed its dog restrictions.

Information on the breed is scant for those wanting more in-depth information, but it’s known that the breed has its origins in Shandong province in China. In the 19th century, that province (as well as some other parts of China) was colonized by Germans after Jiaozhou Bay and Qingdao Peninsula were leased from the Ching Dynasty in 1898. These people arrived in Qingdao Peninsula with their dogs, and after years of breeding their Great Danes and German Shepherd Dogs with local dogs, including the Shandong Xian Hound, the Laizhou Hong was established as its own breed.  Red markings (“Hong” in Chinese means red) are a distinguishing hallmark of the breed.

Described as a confident and loyal dog, it’s said to be friendly and calm, and is touted as a good family dog. We’ve seen, however, references to a natural protection streak, and thus is classed as a high deterrence dog that can work as a protection or working dog on a farm.  As a male dog can reach 32 inches in height and weigh between 77 to 85 pounds, it appears to be a sturdy, robust breed.

The breed showed up in a show catalog for the 2019 World Dog Show in Shanghai under Group 11 – Non FCI Breeds,  but it’s regarded as a rare breed, especially outside of China. There are several breeders found on the Internet, and we know nothing about them, but share the link to one who has a Facebook page  where you can see more photos and videos of the breed. This shouldn’t be construed as an endorsement of the breeder because again, we know nothing about them.

As we get more information about this breed, we’ll be updating this post.

Photo found on Pinterest and happily credited upon receipt of information.