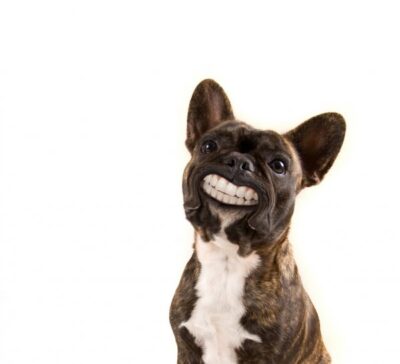 If you show your dog, you come to know which judges count teeth, and those that do become known as “tooth fairies.”

To be fair, a “tooth fairy” judge is doing his or her job by adhering to the breed’s standard because some standards are explicit on this point, particularly in the Working Group which has the most exacting dental standards of all. Best not enter a Leonberger, Rottweiler, Doberman Pinscher or Giant Schnauzer who has anything less than a full complement of teeth under a “tooth fairy” because their breed standards specify that every one of those teeth be accounted for. The Giant’s standard wants, “6/6 incisors, 2/2 canines, 8/8 premolars, and 4/6 molars.”  The Doberman Pinscher and Leonberger standards both call for 42 correctly placed teeth, 22 in the lower, 20 in the upper jaw. Less specific, but still pointing to a mouth full of the appropriate number of teeth are the standards of the German Pinscher, Bernese Mountain Dog, Cane Corso, Neapolitan Mastiff and Tibetan Mastiff, all of which call for complete dentition (which is 42 teeth). If there is one working breed whose standard is more forgiving, it would be the Boerboel whose standard calls for white, strong, and correctly spaced [teeth] with complete dentition preferred.

How about the other groups?

Not one Hound breed calls for all 42 teeth to be present, and only one breed standard mentions full dentition, and even then, it’s merely “desirable.” That breed is the Cirneco dell’Etna.

No breed among the Non-Sporting breed standard asks for 42 teeth, though complete dentition is required for the Lowchen and Xoloitzcuintli, and it’s simply “preferred” for the Coton de Tulear. The Bulldog standard is specific insofar as stipulating that “the teeth should be large and strong, with the canine teeth or tusks wide apart, and the six small teeth in front, between the canines, in an even, level row.”

The Sporting Group is another group in which no breed standard specifies 42 teeth, but complete dentition is required for the Field Spaniel, is preferable for the Nederlandse Kooikerhondje, and for the Weimaraner, it is “greatly to be desired.”

Forty-two teeth are not specified in any terrier breed, though the Parson Russell Terrier standard reads, “Bite – Teeth are large with complete dentition in a perfect scissors bite, i.e., upper teeth closely overlapping the lower teeth and teeth set square to the jaws,” while the Welsh Terrier standard calls for complete dentition in either a scissors bite or level bite, both of which are acceptable.

As for the Toy Breeds, mention of dentition can be found in both the Chinese Crested standard (which states that the “hairless variety is not to be penalized for absence of full dentition”), and the Manchester Terrier standard which calls for proper dentition. The Japanese Chin standard takes a different tact. It reads, “A dog with one or two missing or slightly misaligned teeth should not be severely penalized. The Japanese Chin is very sensitive to oral examination. If the dog displays any hesitancy, judges are asked to defer to the handler for presentation of the bite.”

You can see, then, that the Working Group really does have the strictest language of all the groups regarding dentition.