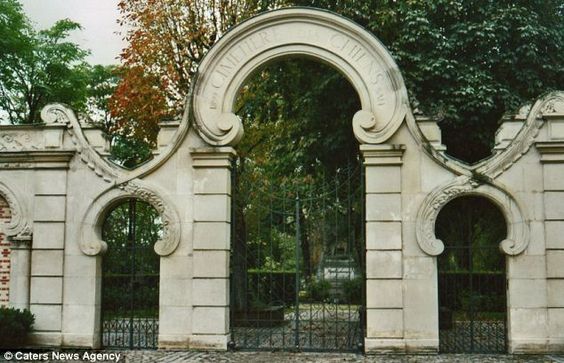 Not counting ancient burial sites such as Askelon, the Cimetière des Chiens et Autres Animaux Domestiques may be the oldest official pet cemetery in the world, but it’s certainly France’s oldest. The idea was conceived of by attorney,Geroges Harmois, and the journalist, Marguerite Durand, and the grounds “opened for business” in 1899. Visitors to the grounds located at 4 pont de Clichy on Île des Ravageurs in Asnières-sur-Seine, Île-de-France, France are greeting by a handsome art nouveau entry gate designed by Eugene Petit. The cemetery, declared a historial monument by the French government, is said to be home to the remains of some forty thousand animals that includes dogs, cats, a race horse, monkeys, and lions, some of whom were owned by famous people such as Alexandre Dumas,Princess Lobanof, and Princess Elizabeth of Romania. The most famous monument may be the one of the famous St. Bernard, “Barry.” “The inscription reads, “He saved the lives of 40 people. He was killed by the 41st.” Legends about this text abound. Some say that that the child on Barry’s back in the statue was the forty-first person he rescued, and as soon as he got the child to safety, he died of exhaustion. Another version has it that a Swiss soldier lost in the mountains for over forty-eight hours was startled by Barry and fatally stabbed him with his bayonet thinking he was a wolf. Happily, both versions are untrue. After twelve years of service at the monastery, Barry lived to be fourteen and died of natural causes. Possibly the most famous resident of the cemetery is Rin Tin Tin. “Rinny” died in 1932 and was first buried at the home of his owner, Lee Duncan, the US soldier who rescued him from the French trenches during WWI. During the Great Depression, Duncan had to sell his house and arranged for Rin Tin Tin’s remains to be sent back to Franc e and interred in the Paris Dog Cemetery. The images show the entry gate, Barry’s famous statue, and both burial plots for Rin Tin Tin. All  images were found on Pinterest and will be happily credited upon receipt of information.