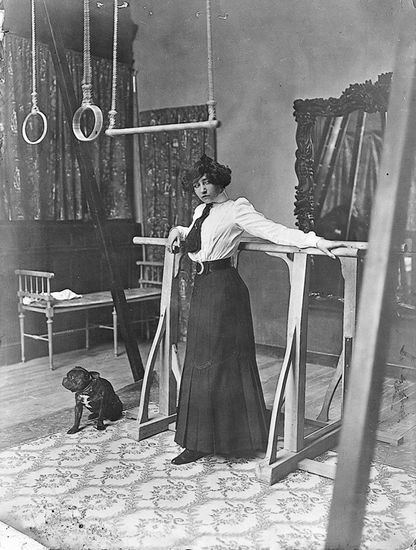 She was a woman ahead of her times, and in some ways, maybe even ahead of ours. The French mime, journalist, and novelist’s name was “Colette;” She was notorious for racy novels and an adventurous life lead by appetites considered shocking in her day. She is best known, however, for her novella. “Gigi,” which earned her the 1948 Nobel prize in Literature. It became the basis for the Lerner and Loewe stage production staring Maurice Chevalier and Leslie Caron, and which will come to the big screen again as Keira Knightley plays Colette in a biopic by the same name.
Colette had a little French Bulldog, “Toby Chien,” of whom, it is said, served as her muse. He was the first of many dogs that figured in Colette’s life, but he may have been the most significant. Toby Chien appeared in Colette’s novel, “Dialogue of the Beasts,” and when Colette broke off her marriage with her two-timing husband, they tussled over the custody of Toby Chien as if he was their child.
Colette was also a devotee of the Beauceron, and it was she who gave the breed its nickname, “the country gentleman.”
Image of Colette with her Frenchie in the private gym she had in the own apartment on rue de Courcelles in 1910. Image found on Pinterest and happily credited upon receipt of information.