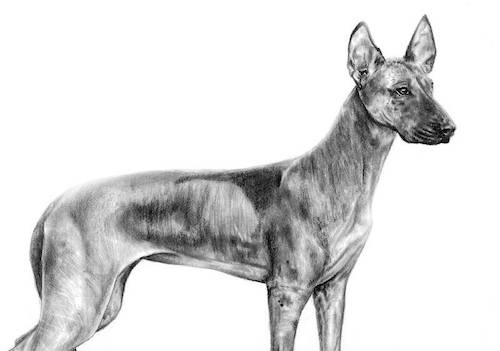 How many of us can say that our breed was once considered to be a guide for humans in the Underworld?

Xoloitzcuintli owners can. In Mesoamerica, Xolotl was the god of fire, lightning, deformities and death. He was also a shape-shifting trickster. According to Aztec creation stories, the dawning of the Fifth Sun was the era in which humans were created. This Sun created by the gods, however, wouldn’t move across the sky without nourishment, and that meant sacrifice. The gods themselves were the first to be sacrificed to the Sun, thereby setting the example that Aztecs would follow by sacrificing other other. Xolotl, however, was no fool. He didn’t want to be sacrificed, and cried so hard that his eye sockets became empty, an image often depicted in Aztec art. While the god was often depicted by images of a maguey plant and an amphibian, his earthly representative was a Xoloitzcuintle, and it was the Xolo’s job to accompany the souls of the dead to the eternal resting place. In Mesoamerican art, Xolotl was often portrayed as a man with a dog’s head.

Not surprisingly, the Xoloitzcuintle is the national dog of Mexico.