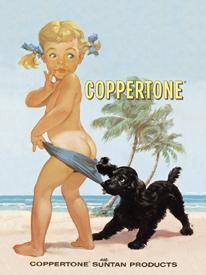 It boggles the mind, the difference that 57 years can make. By today’s mores, there’s all sorts of wrong about the old Coppertone ads. There’s the startled young child with half her bottom exposed. There’s the original Coppertone logo which featured the profile of an American Indian chief with the accompanying language, “Don’t be a paleface!” And as cringeworthy as we find it today, let’s remember that at the time, Eisenhower was president. It’s our view that people need to be judged from the perspective of the times in which they lived. Just saying.

The particular ad seen here can be dated to 1959 when ad artist, Joyce Ballantyne Brand, used her three year old daughter, Cheri, as the visual basis of original artwork that had been destroyed in a fire. In 2004, that “Coppertone child” turned 48, and Brand, who was paid $2,500 for the job, sadly suffered a fatal heart attack in 2006.

Around 1965, a three year old Jodie Foster (yes, that Jodie Foster) made her acting debut as the Coppertone girl in a TV ad.

We leave it to social scientists to sort it all out while we choose to focus on the dog in the ad who was based on a neighbor’s Cocker Spaniel.

For an interesting side note, read this piece.