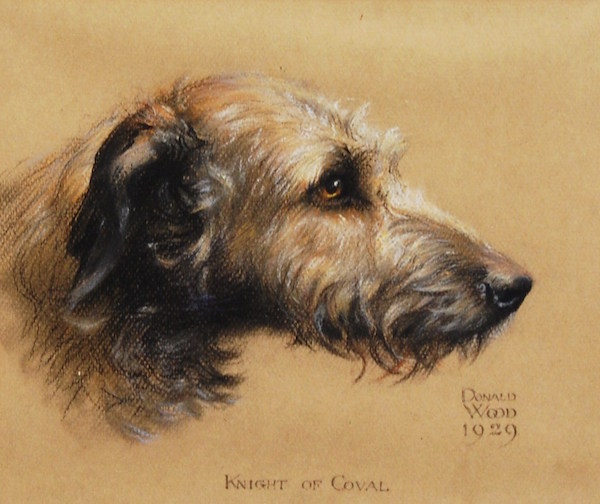 The Irish name for the Irish Wolfhound is Cú Faoil which is pronounced koo fil (“cu” meaning “hound,” and ‘faol’ meaning “wolf”).  Cu is also a term implying bravery, and was once a name given to all large hounds.  Not only that, but the word, “Cu,” was so associated with the strength, speed and noble courage of the dogs that many Celtic warriors took the two-letter word as a prefix to their own names.

Once used in battle to pull enemy warriors from horse-back and break their spines (if the fall didn’t kill them), Irish Wolfhounds were also renowned for hunting wolves, after which the breed is named, of course, and later, wild boar, and deer. Some stories say it even hunted the Giant Irish Elk. As an aside, the Irish Elk was neither exclusively Irish, nor an elk. The now extinct critter was the largest deer species that ever lived, and stood seven feet high at the shoulder with antlers spanning up to 12 feet. The name “Irish” stuck because superbly preserved fossils of the giant deer were common in lake sediments and peat bogs in Ireland.

Image:”Knight of Coval” pastel on paper by Donald Wood – 1929
A sold item left in the Public Domain for research purpose with acknowledgement to www.hamsheregallery.com