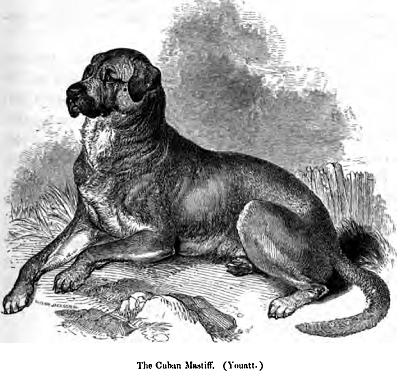 What wouldn’t we give to be able to see a Talbot Hound. Or a Blue Paul Terrier. Or a St. John’s Water Dog which gave rise to so many terrific breeds such as the Labrador Retriever, Newfoundland, and Golden Retriever. Sadly, the aforementioned breeds are extinct – gone forever – as is the Cuban Cattle Dog.

It would have been something to see a Cuban Cattle Dog at work. Though some historical accounts indicate that the dog was used in Cuba to capture runaway slaves, we suspect those canine historians got the breed mixed up with the Cuban Mastiff. The real Cuban Cattle Dog had a very specialized task, and that was to escort cattle. To shore. From water.

What was a cow doing in deep water? Desmond Morris described it very nicely in his book, Dog, and we paraphrase: When ships carrying livestock arrived in West Indian colonies, they hoisted oxen off the ship by passing a sling around the animal, and often through its horns. The animal was lowered into water, at which point men generally swam next to it and guided it to shore by the horns – but not always. The job was also performed by Cuban Cattle Dogs who grasped the bewildered critter by the ears, and forced it to swim to shore where they let go of the ears once they could sense that the beast’s feet were touching ground.

Why are we sharing the account of an extinct dog with you?

One day in the future, a child might learn about an amazing dog that had a long, low slung body, amazing big round eyes, and a head that looked like it was wearing a furry crash helmet. Some people said it traveled with gypsies. Some said it was named after a farmer. Some said it liked to dig and bark, and some said the breed came in only two colors. Few people were really sure what the dog was like since the breed went extinct many years before.  The child would sigh and say she would liked to have touched a “crash helmet dog head.”  And her great grandmother would tell her that she actually got to see a Dandie Dinmont when she, herself, was a little girl.

It can happen.  National Purebred Dog Day seeks to promote and protect all our purebred dogs, especially the vulnerable ones. For a list of British breeds considered vulnerable, visit this link.  It might surprise you to see what breeds are listed.

2 thoughts on “The Cuban Cattle Dog”