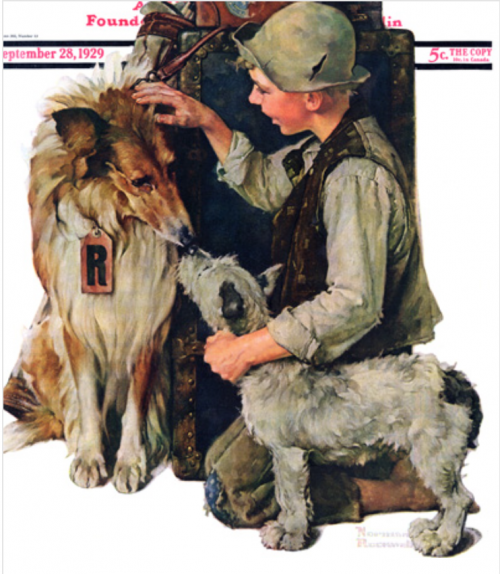 Norman Rockwell often (and liked to) feature dogs on his Saturday Evening Post covers. Cocker Spaniels and loveable mutts figured frequently, but he did include other purebred dogs, and the Collie was one of them.

Dogs were important design elements of his work and were often placed as central characters. In the image seen here, the Collie provides balance to the boy’s strong vertical line, and touching noses with the other dogs brings a needed horizontal aspect to the piece.  That said, Rockwell really liked dogs. They often accompanied him to his studio, occasionally napping on the floor next to him as he worked. Sometimes he borrowed neighbors’ dogs to be models, but one wonders about the Collie in this picture.

From Kate Kelly’s America Comes Alive:  “Rockwell needed to go to Europe on business, so he had to leave his collie, Raleigh, behind. According to O’Connor, the dog mourned terribly for Rockwell, and the vet felt the dog would surely die. Norman returned home, picked up Raleigh, and responded to the situation by hand-feeding Raleigh every two hours for days. The dog perked up, put on weight, and regained his health. However, his whiskers remained white and sad-looking. The story goes that Norman said to the dog, ‘Listen, Raleigh, I promise I’ll never leave you alone again if you just let the whiskers get back to their natural color.’ In a few short weeks, Raleigh’s whiskers were dark again, and Rockwell maintained his promise to Raleigh, never leaving him again.”