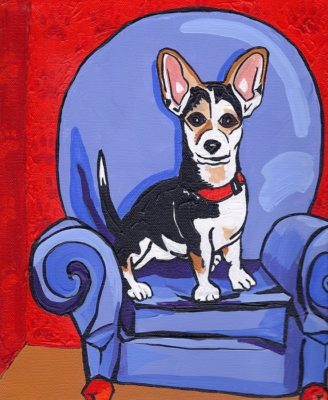 The residents of Third Street in Carroll Gardens (“Ratpacks Overrun Third Street,” Jan. 21) should get rat terriers to solve their rat problem once and forever.

To spend $150,000 on bait is a joke. Rats are too clever to take the bait, and the poison can kill or injure other life forms including children.

Rat terriers are hardy and resourceful dogs. They can kill hundreds of rats in a short period of time. One rat terrier holds the record of killing 2,500 rats in seven hours.

I have used rat terriers on my North Carolina property. One rat terrier too care of the rodents under my crawl space and in my barn.

I suggest the residents of Carroll Gardens look into this option. It’s a lot cheaper and it works.

Ms. Weher knew her stuff back in 1996 when she wrote the aforementioned letter to The Times. In her complaint, she referred to a British Rat Terrier in the 1800s who killed exactly 2,501 rats in a rat infested barn in a seven-hour period. While the current AKC breed standard doesn’t refer to weight, the average weight of a Rat Terrier weighs anywhere from five to eighteen pounds, and the most common rat in England in the 19th century was the Brown rat that weighed, on average, 8 pounds.  In doing the math, this hints that (depending upon the actual weight of the dog in question which we’ve put at the low end of 8 pounds), it’s possible that the recording holding Rat Terrier dispatched 20,008 pounds of rats when he, himself, may have only weighed eight pounds.

Rat Terriers were bred specifically to deal with (in a deadly sort of way) farm pests, and certainly rats were a problem.  Before farmers used poison to kill the critters in the 1950s, the Rat Terrier was one of the most common farm dogs in America. Like a family recipe passed on down the years, different farmers used different dog breeds to “create a better mousetrap,” so to speak. Italian Greyhounds and Whippets were added to add speed, and Beagles were introduced to enhance the Rat Terrier’s pack hunting. When all was said and done, the Rat Terrier wound up with more than seven breeds in its ancestry, and they included the Manchester Terrier, Smooth Fox Terrier, Bull Terrier, Whippet, Italian Greyhound, Beagle, and the now-extinct Old English White Terrier.

We’ve written before about R.A.T.S. but it seems to us that other cities should be exploring the group to encourage “chapters” in their own cities. Of the ten most rat-infested cities in the western world, eight are in the United States: Detroit, Boston, Chicago, Baltimore, Atlanta, New Orleans, Houston, and New York City in which a chapter is alive and active.

There are, we’ve learned, also several active rat catching groups in the UK and the dogs hunt with “the speed and efficiency of mafia hitmen.” In 2005, one British ratting group “harvested” 407 rats in just a few hours, and a year earlier, a Cornwall group with just 10 terriers said “bye bye” to over 2,000 rats.

We’ve said it here before, we like rats, but only in the appropriate setting. Left unchecked, rats spread disease, contaminate dog food, chew up the wiring in vehicles, gnaw and burrow into upholstered furniture, tunnel into insulation, and, it’s estimated, contaminate and destroy ten times more food than they eat.

Rat Terriers. The green answer to a rat problem.