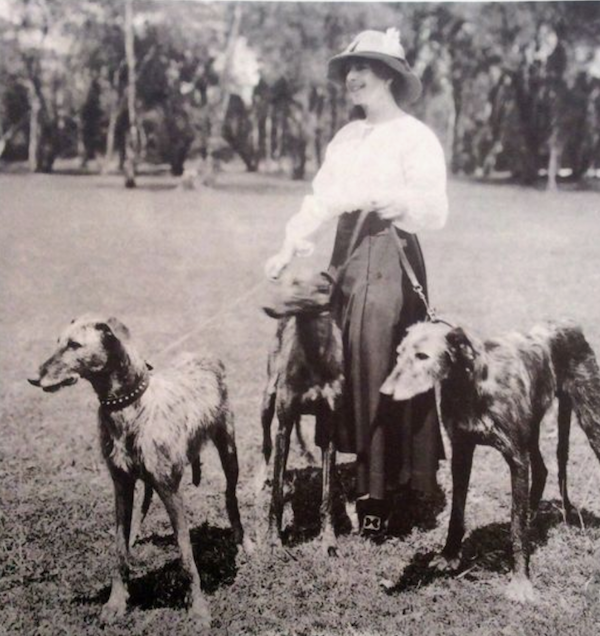 Giving a dog as a gift is rarely a good idea, let alone two Scottish Deerhounds, but that is what Karen got as a wedding present, and we are the better for it. The stories Karen told of life with her dogs were memorable because Karen was a born story-teller. Consider this brief anecdote by her hand following the “backstory.” Her Scottish Deerhound, “Pania,” had successfully treed a serval cat native to Africa which is where this story is set. On the day his mistress, Karen, returned from a partridge hunt with nothing to show for her efforts, “Pania” repeated the performance. Karen picks up the story from there:

“I ran up to the tree. But, when I looked up, there was a black domestic cat sitting, very angry, as high up as possible in the swaying top of the tree. I lowered my gun. ”Pania,” I said, “you fool! It’s a cat.

“As I turned round to Pania,  he stood at a little distance, looking at me and splitting his sides with laughter. When his eyes met mine he rushed up to me, danced, wagged his tail, whined, put his feet on my shoulders, and his nose to my face, then jumped back again to give free course to his laughter.

“He expressed by pantomime: ”I know. I know. It was a tame cat. I knew all the time. Indeed, you must excuse me. But if you only knew the ﬁgure you cut, rushing up to a tame cat with a gun!”

By now, some of you may suspect that our “Karen” wrote under the pen name, “Isak Dinesen,” (used in English-speaking countries) and “Tania Blixen” used in German-speaking countries. Perhaps even more of  you will rememberer the Meryl Streep/Robert Redford movie, “Out of Africa,” which told her story as a plantation owner, and her passionate love affair with a free-spirited big-game hunter.  In her book, Karen hints at her dogs’ genuine sense or humor by reminding Dinesen of the time she nearly shot her own cat out of a tree, and every time the two of them go by that tree, the Deerhound gestures toward it with a chuckle. As one book reviewer wrote, “Think about spending the rest of your life with a dog who reminds you of your most idiotic moments.

She wrote of her dogs,  “In Africa I never had dogs of any other breed than the Scotch Deerhound. There is no more noble or 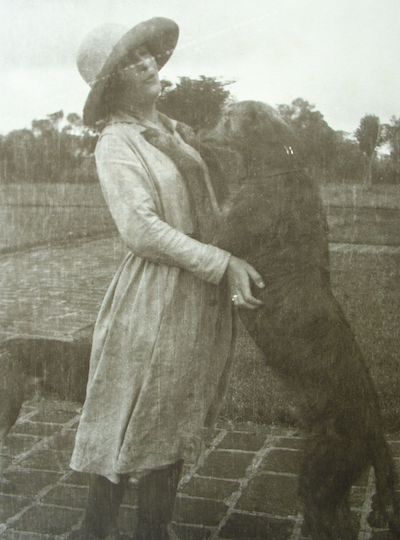 gracious kind of dog. They must have lived for many centuries with men to understand and fall in with our life and its conditions the way they do. You will also find them in old paintings and tapestries, and they have in themselves a tendency to change, by their looks and manners, their surroundings into tapestry; they bring with them a feudal atmosphere.…The Scotch Deerhound went well with African scenery and the African Native. It may be due to the altitude, –the highland melody in all three, – for he did not look so harmonious at Sea-level in Mombasa. It was as if the great, spare landscape, with the plains, hills and rivers, was not complete until the deerhounds were also in it. All the deerhounds were great hunters and had more nose than the greyhounds, but they hunted by sight and it was a highly wonderful thing to see two of them working together. I took them with me when I was out riding in the Game Reserve, which I was not allowed to do, and there they would spread the herds of Zebra and Wildebeest over the plain, as if it were all the stars of heaven running wild over the sky. But when I was out in the Masai Reserve shooting I never lost a wounded head of game, if I had the deerhounds with me.”

There are parts of Blixen’s life that are less known, but we are more interested in her role as a Deerhound owner. The film left out the fact that she had two Deerhounds, “Dawn” and “Dusk,” not one, but her favorite was “Dusk,” the dog with whom she’s often seen in several photos.

Karen bred her two Deerhounds, and Dawn gave birth to two male puppies, “Askari,” and “Pania.” In a letter to her mother, written in June, 1917, Karen wrote: “My two little dogs, Askari and Banja are here with me…….. These two were just born when I arrived and are so comical, they are the image of Dusk in both appearance and character. These deerhounds are very faithful and intelligent, sweet dogs.”

Tragically, Dawn was killed when she was snatched by a leopard off the front porch when her puppies were only a few months old;  a year later, Karen wrote to her mother, “My little dog Banja (Pania) had a fight with a big boar that tore his chest badly, but I think he is recovering.”

Pania made a full recovery and lived another nine years, but that same year, she lost Dusk who had run off into the bush after an animal while they were on safari. Days were spent searching for the dog, and a reward was posted, and only after Karen had sent her head man to search for Dusk in the mountains was the dog found.  Dusk was lying beside a zebra he had brought down, he had been kicked repeatedly in the chest by the zebra and was coughing up blood. He died within an hour of being found, and was buried by a large tree up in the mountains.

In 1925,  Karen acquired another female Deerhound during a trip to Denmark. She called this dog, “Heather” and brought her back to Kenya. An “oops” mating with a wild dog resulted in puppies that Karen reasoned would make good lurchers, and the pups were found homes with neighbors.  The next year, Heather and Pania had two puppies together, and in 1927, Pania passed away  from what was regarded as old age – he was ten years old.

In 1928, Heather was bred again, but a difficult whelping resulted in two small puppies. Heather never really recovered from the complications she’d had, and a month and a half later, she died.  Her puppies were named “David” and “Dinah,” but for reasons unknown, David died in 1930.

In 1932, Karen return to Denmark for good. She left Dinah and one other dog behind with a good friend reasoning that the dogs would be happier. Karen would never have another Deerhound again, but it’s said she never forgot the ones she had in Africa.

Image of Karen Blixen and her dogs

In another post, we discussed that in the history of some breeds, different “strains,” or lines develop, and the Catahoula Leopard Dog (sometimes called the Catahoula Cur) has a similar past. There were early individual lines that no longer exist today in large part because the three best known ...

A quickie reminder that our Purebred of Interest this Thursday, April 9, is the incredible Anatolian Shepherd. The more owners we have on hand that day, the more robust the conversation, and the better the rest of us will learn about this Livestock Guardian Breed, so please share this with anyone you know who is lucky enough to have this dog. ...

First, about the prize: In 2015, Duke Richard of Buccleuch (also the chief of Clan Scott), gave his blessing for Dandie Dinmont Terriers and their owners to wear the Sir Walter Scott Black and White Tartan as the breed’s “official” tartan. This makes the Dandie Dinmont Terrier the only dog breed in the entire world to have its own, Clan Chief approved, tartan.

The occasion occurred on the 200th anniversary of the publication of Sir Walter Scott’s “Guy Mannering,” the book that famously gave the breed its distinctive name and makes the Dandie Dinmont Terrier the only dog breed in the world named after a fictional character.

The DDTCA has donated a 100% lambswool Sir Walter Scott (personal) Black and White Tartan scarf measuring approximately 74 inches long by 10 inches wide, and a Dandie Dinmont Terrier-sized dog bandana that can be custom fit, if need be. Possession of the scarf and bandana do not require the wearers to own or be a Dandie Dinmont Terrier, of course, but we at National Purebred Dog Day want to winning photographer to be aware of how special their prize is. The Dandie Dinmont Terrier is a vulnerable breed, its numbers so low that the breed is outnumbered by Panda Bears.

The winner of this scarf and bandana will undoubtedly be complimented on them, and it is our hope that the winner will use the opportunity to advance the cause of the Dandie Dinmont Terrier to anyone who remarks or inquires about their finery.

Now to the contest theme. At this time, the world is in the throes of the Coronavirus pandemic, and we are all finding ways to navigate our “new normal.” Part of the challenge is to find ways to keep our dogs engaged while following stay-at-home and social distancing protocols. The theme of this challenge, then, is "Quarantine Creativity.” Judges will be looking for the most creative ways you keep your dog engaged, motivated, and active. Please note that because of the impact to most businesses across the world, there may be a delay in shipping because Scotch Tweed in Scotland has likely also felt the consequences.

The Dandie Dinmont Terrier Club of America has opened this contest up to all breed owners throughout the world, so competition will be stiff. Show us what you’ve got, Schipperke people, bring it on, Briards, dazzle our judges, Dachshunds.

As with the other challenges, there are pesky rules you need to read to make sure you comply with the challenge:

This contest is open to residents of the world;

No photoshopping! Our judges, David Frei, and Westminster Kennel Club photographer, Jack Grassa, must see what you actually shoot with your camera;

One photo submission per person per contest challenge;

Photographers may enter four photo challenges. Entering this one entitles you to enter three more;

The submitted photo must be taken for this contest. Old photographs won’t be considered;

Your photo must include a purebred dog;

Your sign must also include one of the following:

You can download and print these signs from the files at the very bottom, or you can make your own sign. You may also substitute the sign with an official NPDD t-shirt, tote bag, hat or bumper sticker, all of which are available here.

Do not photoshop the “I ❤️Purebred Dogs, "Happy National Purebred D❤️g Day” or “I ❤️My Purebred Dog” on top of your image. The signs or NPDD gear must be part of the photo shoot;

Many people may help you take your picture, but the prize goes to the person submitting the winning photograph. Judges decisions are final;

A photo submission implies consent that it may be shared on NPDD’s various social media platforms, and by the Dandie Dinmont Club of America, for promotional use;

When submitting your photo on Facebook, you must indicate the name of the photo challenge you are entering, which in this case is the “Quarantine Creativity” Photo Challenge;

This contest happens on May 1 on NPDD’s Facebook page. A full explanation of when, where, and how to submit your picture can be seen here.

Especially importantly - be sure to have fun with your dog! ...