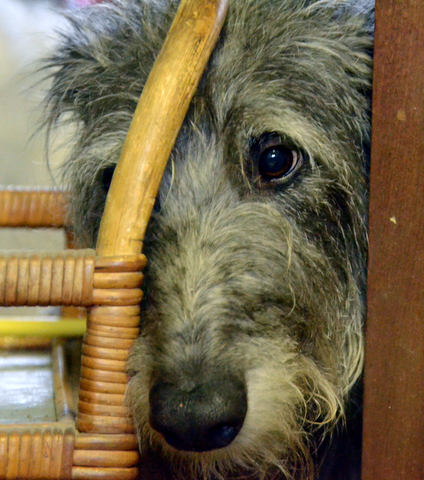 “Padfoot” was played by Scottish Deerhound, Champion Kilbourne Macleod –  “Macleod” to his confidents. He was one of two dogs from Kilbourne Kennels in Derbyshire, England who trained with Birds and Animals Unlimited.

MacLeod’s owner, Glenis Peach, said in an interview with the Belper News that when the franchise movies first began, she was approached about using one of her Deerhounds as a model for the first Sirius Black.
If you don’t already know, Sirius’ Animagus form was described as “a bearlike black dog” in the books, but the breed has never been specified. Peach’s hounds, Fern and Fife, were used for the Prisoner of Azkaban; Fern was given pointed ears and learned to perform stunts, but for all that, Fern and Fife’s parts ended up on the cutting room floor when animated look-alikes were used instead. 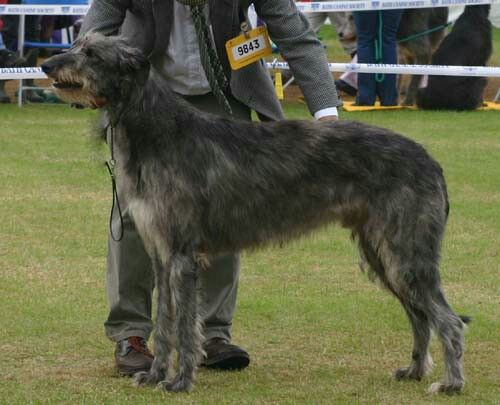 Animators for the fifth film didn’t want to repeat what had already been done, but by then, Fern was too old. A younger dog was considered, and “Macleod” along with Fife were chosen.

All of the filming took place over three months in 2006 at a studio in London, and both dogs had been dyed black for their starring roles with Macleod ultimately doing all the filming. At the end of shooting, Macleod returned to the show ring and earned his champion title, but he was no stranger to dog shows. He won Best Puppy at Crufts in 2004 and took a break from the show ring while filming because of his temporary “dye job” which, fortunately, washed out.

Of all the movies in the franchise, Order of the Phoenix had the highest number of real animals involved, including an owl, rat, crow, cat, a bat, Highland Cow, and of course, a dog.  Some of these animals were a patronus, which is a kind of “Anti-Dementor,” or guardian that acts as a shield against Dementor.  A Patronus has two forms, non-corporeal and corporeal, and about 2% of Harry Potter enthusiasts who take the patronus test at the official Potter site, Pottermore, draw a Deerhound as the corporeal form of their patronus protection charm. Unbelievably, we didn’t. We got a hummingbird. A bird is nice (but it’s not a dog). Take the test and see what you get here.

Image of Champion Kilbourne Macleod found on Pinterest and happily credited upon receipt of information.

Image: “Let me in the kitchen!,” Dreamstime Photo