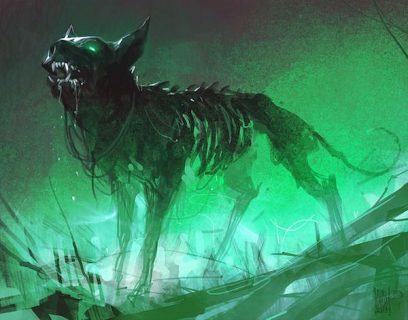 There’s an eerily quiet little town in North Carolina called Valle Crucis, a place that takes its name (“Valley of the Cross”) from two streams that meet at right angles in the middle of the valley. Close by, an old stone church – St. John’s Episcopal –  sits near Highway 194, its front yard a cemetery filled with leaning old gravestones.

You don’t want to drive past this place.

On clear night lit only by the muted glow of the moon, two young men did drive past this place. As the car they were in passed the old church, a shadow leap out from behind one of the headstones and in front of the car. The driver swerved to avoid hitting it, then slammed on the brakes and pulled over to see what had jumped in front of them. Looking over his shoulders and craning his neck, the young man didn’t quite believe his own eyes. It was a dog.

The dog, however, was as tall and as wide as a man. It was covered with black fur bristling with rage, and from massive, yellow teeth hung strands of glistening saliva. Worse, the animal’s eyes were glowing. They weren’t reflecting light the way an animal’s eyes do when catching headlights, but actually glowing a smoldering red that seemed straight from the fires of Hell.

No fool, the driver took his foot off the brake and slammed on the gas pedal when he saw the dog approaching them. The car shrieked into the darkness and roared down the hairpin turns and twists of the mountain road at a reckless speed. When the driver finally remembered to breath, he looked in the rear view mirror and was incredulous to see that the dog was not only following them, but keeping up and even gaining. As God was his witness, the driver was certain the dog was going to leap onto the car and drag it, and its contents, back into hell. He gave the accelerator one final push to the floor, and just as “it” was about to catch them, the car practically flew over the bridge where the streams met in a cross.

And the dog stopped following them.

Was there some supernatural law that kept the dog from crossing water, or streams that intersected to form a cross? Who knows. North Carolina’s mountains have generated a lot of stories of phantoms, ghosts, spooks, and weird creatures, and as fun as ghost stories are, Valle Crucis does exist, St. John’s Episcopal Church exists, and legends of the hellhound and other strange sightings have been told in North Carolina for generations. As they say, “believe it or not.”

This story is shared because it’s being written on Halloween, 2017. The image is by ARASHRADKIA.