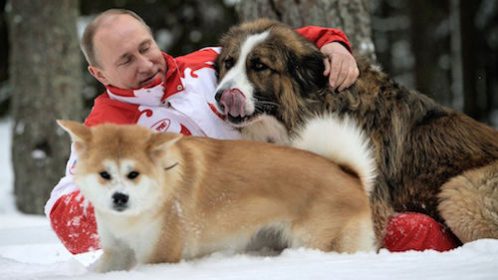 What is it with Vladimir Putin and dogs? Or more precisely, why does he keep getting them as gifts?

In 2000, Sergey Shoigu, a Russian general and Minister of Defense, gifted Putin with “Koni,” a black Labrador Retriever. The dog had not only been bred at the same government center that trains Russia’s search and rescue dogs, but has a pedigree that includes dogs owned by a former head of the Soviet Union, Leonid Brezhnev.  “As far as bad moods go,” Putin once said,  “of course I have them like any other person, but in those cases I try to consult with my dog Koni — she gives me good advice.”

In 2010, Putin received a ten week old Karakachan during a visit to Bulgaria to sign natural gas accords. A national contest was held across Russia to pick a name for the dog; the winner? Dima Sokolov, a 5-year-old boy who suggested “Buffy.”

Two years later, the Akita prefectural government in Japan gave Putin a three month old Akita as a sign of gratitude for Russia’s support during the 2011 earthquake and tsunami.  President Putin named the dog “Yume,”  or “Dream.”  Japan wanted to give Putin a second Akita Inu in 2016 during a state visit, but he politely declined to accept it, a gesture that some experts think may have offended the Japanese government.

In 2017, Turkmenistan president, Gurbanguly Berdymukhammedov surprised Putin during a business meeting over unresolved issues dealing with natural gas. At one point, Berdymukhammedov turned to Putin and said, “We have a common friend. This is the world’s unique alabai dog. And today I brought this little alabai with me.”  Putin was handed a Central Asian Shepherd puppy, and planted a kiss on the dog’s head.  The dog was named “Verny,”  meaning “faithful” in Russian.

One couldn’t be blamed for being a bit suspicious that Putin’s self professed “dog love” is often strategic. His government authorized the rounding up and extermination of hundreds of stray dogs leading up to the Winter Olypics in Sochi in 2014 – and during that meeting with Berdymukhammedov, Putin wouldn’t have been the only person in the room with a checkered history regarding dogs. Berdymukhammedov is said to have a revulsion for dogs, particularly strays. Under Berdymukhamedov’s orders, multiple mass culls have been carried out in his country, most recently last year when municipal workers planted poisoned food around the city. As if that wasn’t bad enough, many pets were unintentionally killed, as well.

Diplomacy evidently missed the message that dog fanciers learn early.  Giving dogs as gifts is something strongly discouraged by most breeders and clubs, but perhaps it depends upon the circumstances, whether a dog is even welcomed, and how suitable the new home and owners are to have a dog?  A study published in the journal Animals found no significant relationship between getting a dog as a gift and the level of attachment to the dog. Some suggest that recipients feel greater attachment to a dog given to them as a gift because the dog was given to them by a loved one, something underscored by the same study that reported that 75% of people who got a dog as a surprise were good with it, and that the surprise increased their sense of attachment.