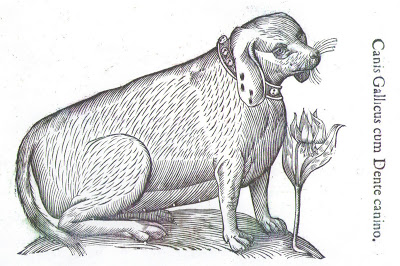 “Dog geeks” already know the name, Dr. John Caius. He was an important pioneer in advancing the science of anatomy, was physician to Edward VI, Queen Mary and Queen Elizabeth, and may have been the inspiration for the character of Dr. Caius in Shakespeare’s, Merry Wives of Windsor. Dogdom, however, knows Dr. Caius for having written the first book published in England devoted entirely to dogs, Of Englishe Dogges, the Diversities, the Names, the Natures, and the Properties. It was also the first in any language to attempt to work out a scientific classification into which dogs could be divided.

First in Caius’ classifications were “generous” or “thorough-bred dogs,” followed by “hounds” (which included terriers, harriers and bloodhounds). Next came “hunting dogs,” which included the gazehound, greyhound, limer and tumbler; the limer, by the way, may have been an early name for the type of bloodhound that was put on a leash to follow blood trails of wounded game). The “hawking” or “fowling” dogs included spaniels, setters and water spaniels, followed by the “delicate” dogs,” a category limited to “comforter” or “spaniel gentle,” what we today would call the toy breeds. “Country” dogs included the mastiff and shepherd’s dog, and the final category was one Caius called (our personal favorite) “Degenerate.” These were the dogs that either worked in the kitchen as a turnspit dog, barked to guard the house (dogs he called “wrappe”), and “dancers” (dogs that performed tricks, or danced to the sound of an instrument for a crowd’s amusement.)

Caius’s book not only indicated that educated men (men who would read) had in interest in dogs, but his 16th century descriptions give rise to an awareness of some sixteen breeds at the time.  Take this description, for example:

“There is another kind of dogge which for his incredible swiftness is called Leporarius or Grehounde, because the principall service of them dependeth and consisteth in starting and hunting the hare, which dogges likewyse are indued with no less strength than lightness in maintenance of the game, in serving the chase, in taking the bucke, the harte, the dowe, the foxe, and other beastes ordained for the game of hunting. . . . For it is a spare and bare kinda of dogge (of fleshe but not of bone); some are of a greater sorte, and some of a lesser, some are smooth skynned, and some are curled; the bigger are therefore appoynted to hunt the bigger beasts, and the smaller serve to hunt the smaller accordingly.”

John Caius died in 1573, but his legacy to our early knowledge of dogs is of tremendous value.

Image: Drawing of Canis gallicus by Ulysses Aldrovandus who would have been fifty-one years old when Dr. Caius died.