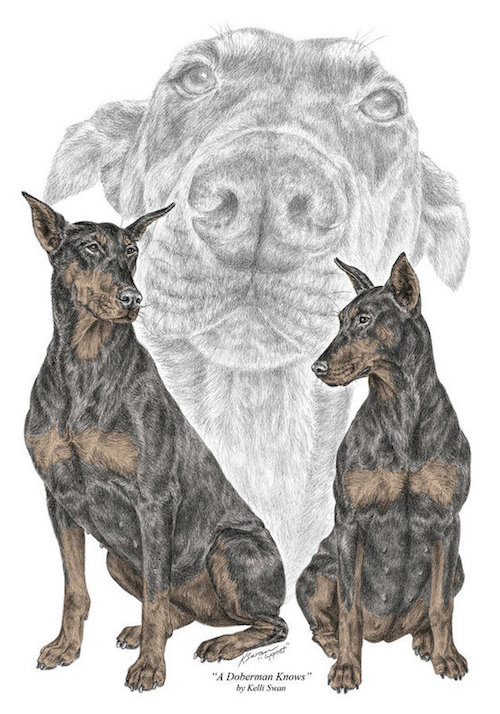 Yes, Virginia, there is such a thing as a Doberman Drill Team. The first of many started by Tess Henseler performed at Westminster Kennel Club dog show in 1959 at Madison Square Garden.  Later, Rosalie Alvarez formed her own team that performed at celebrations and sporting events (including a half-time show at a San Francisco 49’ers game) and showed off the breed’s intelligence and agility.

An article in the July 1986 issue of Dog World showcased the team and how dogs were selected (there was one basic
demand: Good, sound temperament). Early on, Rosalie realized that some of the dogs were more handsome than others, a problem solved with capes. Units consisted of 22 marching people who practiced with 18 well trained Doberman Pinschers for approximately eight hours every week, including weekends. It was a wonderful goodwill effort that changed a lot of minds about a breed mischaracterized by a spate of Hollywood movies. Below is a video – poor quality because it was taken from a very old VHS tape, but that gives us an idea of the work that went into a demonstration (especially deeper into the tape).

In 2006, Rosalie Alvarez received a Lifetime Achievement Award from the AKC for reasons beyond the drill team. She trained the first Doberman in the United States to obtain the UDT SchH 3 degree, and ten of her Dobermans earned Utility and Tracking degrees. She had numerous High in Trials, including two at the Doberman Pinscher Club of America’s National Specialty.  She was recognized with a special citation by the Santa Clara County Sheriff’s Department for developing and training their canine unit. She is an AKC Obedience judge, and for all that, she found time to work with the Doberman Drill Team and give demonstrations at hospitals and public events.

To our knowledge, there are still some Doberman Drill teams out there, and if any Doberman folks can shed more light on this, we’d love to give them their “props.”

7 thoughts on “The Doberman Drill Team”