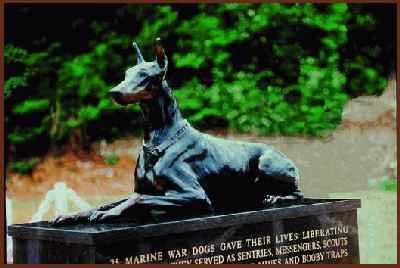 “Kurt” was the first casualty. The Doberman was wounded by a Japanese grenade and would become the first to be buried in what would become the war dog cemetery. More followed. Twenty four Doberman Pinschers, more. All of them war dogs now buried on Guam.

“Cappy” was another dog. Scouting for a Marine line officer named William Putney, Cappy, went ahead and suddenly alerted that there were enemy ahead. A shot rang out, hit Cappy and he jumped up in the air about three or four feet and fell dead. Forewarned, the Marines were able to take the rocks, killing five Japanese soldiers and taking one prisoner. Cappy had saved those lives.

After the war, Putnam moved to Los Angeles and started a veterinary practice, but the former Marine never forgot.

In 1989, he returned to Guam to visit the dogs’ graves and was horrified to find their cemetery overgrown and neglected. Putney found a new home for the cemetery at the naval station and worked with the United Doberman Club on a memorial. He donated a granite monument that is inscribed with the names of the dogs and the fate of each. It is topped by a life-size bronze statue of a sitting Doberman, titled “Always Faithful,” sculpted by Susan Bahary Wilner.