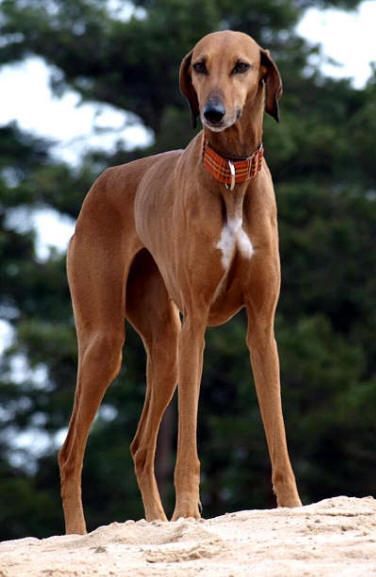 Two years ago, the Sloughi became one of two breeds eligible to compete in its respective AKC group (in 2016, the other breed was the American Hairless Terrier).  The Sloughi (pronounced SLOO-ghee) is one of those exquisite African sighthounds (this one is primarily from Morocco) that has a sweet, gentle, almost doe-like expression that can seem at odds with its aloof demeanor. This is a leggy breed, slightly higher than long, and is one of those impossibly long legged dogs that likes to sprawl on a soft blanket,  its legs stuck out in the air with its neck twisted in an impossible angle.The common thought at seeing these dogs asleep is that they can’t be comfortable.

Sometimes called the Arabian Greyhound, the Sloughi is very old, and was mentioned in a book thought to have been written in the 13th century by the Moroccan writer, Al Mansur.

At one time, it was thought that the breed was closely related to the Saluki, but DNA testing revealed that the two breeds are only remotely related. In actuality, the Sloughi’s closest relative is believed to be the Azawakh which belongs to the Berber tribes of southern Sahara. Still, the two have been separated long enough that there are distinct differences between them.

Image of a Sloughi found on Pinterest and happily credited upon receipt of information.