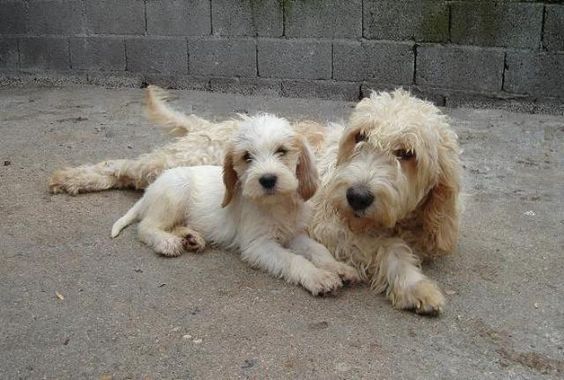 These French scenthounds were developed over the last 500 years in response to demands made by the particular geographic area in which they hunted, and the type of game in which each breed was considered a specialist. The Grand was used on wolf and boar, the Briquet Griffon Vendeen hunted roe deer, and everything smaller fell to the Petit and the Grand Basset.

Most of us are less familiar with the Briquet Griffon Vendeen which was developed by Comte d’Elva in the period just before the beginning of the first world war. Bred down in size from the Grand Griffon Vendeen, this is the only breed to retain the word, “Briquet” in its name, the word meaning “medium sized dog” in French. The Briquet nearly went extinct after WWII, but through the work of a French dog show judge, Hubert Dezamy, the breed was restored. In 1995, a team of Briquets won the French cup for roe deer hunting.

The Grand Griffon is also an uncommon breed that was known in the early 15th Century, but is now the rarest of the hunting Vendeens. We wrote about its appeal to contemporary hunters here.

The Grand Basset Griffon Vendeen wasn’t fully developed as an individual breed until the the late 1800s, but in France, these dogs are still used to hunt wild boar, and the occasional roe deer and hare. In that country, a “GBGV” cannot become a champion without official proof of their field work.

The Petit Basset Griffon Vendeen, or PBGV, is the most familiar of the Griffon Vendéens by virtue of having been part of the AKC family for nearly thirty years. Its name forecasts what one can expect a PGBV to be: Petit – small, Basset – low to the ground, Griffon – wire coated, and Vendéen – the area of France in which the breed originated. In the UK, these dogs are known as “Roughies”, and in Denmark, they’re referred to as a “Griffon” or “Petit.”

What all these Griffon Vendéens have in common is a good voice, robust constitution, an eager to please attitude (though with shades of stubbornness), and big personalities.