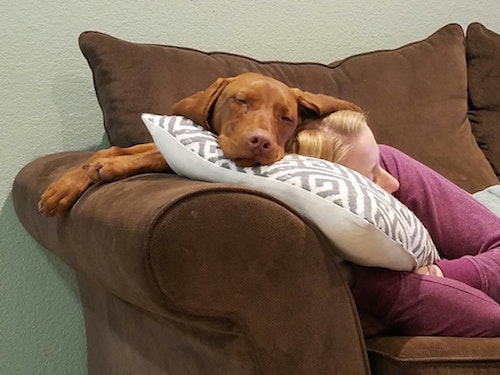 Many of us have dogs that never leave our side, some breeds better known for this than others.  They’re often called “velcro dogs,” but in Hungary, there’s an old Maygar saying that, “If you own a Vizsla, it lives on top of your head.”  Sensitive, affectionate, and loyal, Vizslak, nevertheless, aren’t pushovers. As an old story about the breed goes, the theft of the Crown of Saint Stephen (said by some to be the oldest crown in existence) foiled by a pair of sleek, red-gold Vizslak, one dog gripping the thief’s gun hand, the other barreling him over. Their “arrest” in the 1940s enabled actual human guards to more formally put the man in custody. No wonder the breed is considered a national treasure in Hungary.