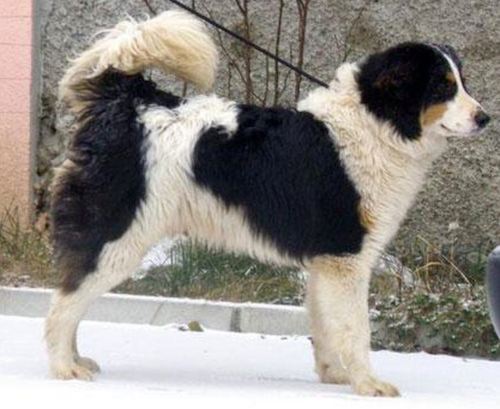 When the magnificent dog seen here gains full AKC acceptance, it will be a member of the Working Group, its breed known as the Tornjak. The Tornjak has been guarding cattle and flocks of sheep in Bosnia and Croatia for over a thousand years. Indeed, a description of the breed was found in the archives of a bishop of Djakovo in the year 1062. The breed was referred to then as, “Hrvatski pas planinac,” or “dogs from the mountain.” The name was later changed to Canis Montanus, and then again to its present name, the Tornjak,  “tornjak” coming from the word “tor” which is an expression used to describe enclosure space, intended for sheep-holding under a clear sky, during the mountain pasture season.

The Tornak is a tenacious protector. Shepherds used to say that a Tornjak who guards the flock is a fair match for two wolves, and that a pair of Tornjak will confront and chase away a bear without any qualms.  This is also a big dog! Heavily built, the Tornjak may be a descendent of the Tibetan Mastiff and similar types of guarding dogs that came with migratory nomads to the Balkan Peninsula 7,000 years ago. Another theory maintains that the Tornjak was developed from the livestock guardian dogs brought by the Croatian shepherds.

In 1970s, the Tornjak faced imminent extinction. Breed enthusiasts scoured Croatia, Bosnia and Herzegovina in search of remaining dogs that matched the description on the ancient manuscripts. In1981, the Tornjak was registered as an autochthonous (indigenous) breed with the official name of Boznian-Herzegovian Sheepdog – Tornjak. A commission was established in Zagreb, and under the supervision of the Croatian Kennel Association, a breeding program was started in 1982. The first breed standard was written in 1990, and in 1997, more than 200 pedigreed Tornjaks were registered. The date of acceptance on a definitive basis by the FCI was 11/7/2017, and the Tornjak is currently an FSS breed with the AKC.

4 thoughts on ““Dogs from the Mountain””