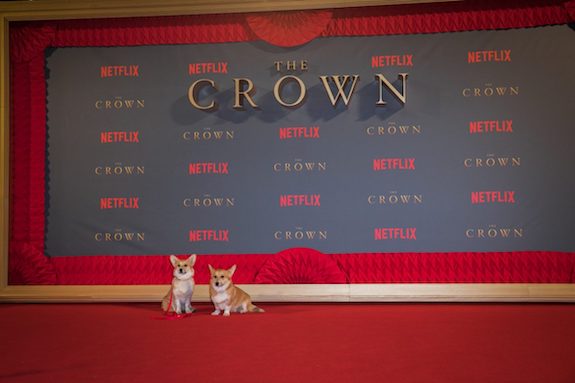 When the historical drama, The Crown, premiered on Netflix, the production company that commissioned it,  it was the most expensive TV series ever made to date.  Its popularity also led to a resurgence in searches for the Pembroke Welsh Corgi, a breed that had been listed as vulnerable by The Kennel Club. The club reported that interest in the breed shot up by 22% in 2017, and breed registrations rose to 456 between 2016 and 2017. This was good news for a terrific breed, but it got even better. After The Crown’s second season, the Kennel Club saw enough interest in the breed to take it off the vulnerable list entirely.

After the first season, Netflix UK wisely capitalized on the show’s canine stars and released a version of a key scene between Elizabeth and Philip, but with different “actors” standing in for Claire Foy and Matt Smith. Check it out:

Fans of the show who are also dog people noticed, however, that there were many purebred dogs in The Crown.

Sussex born and breed Labrador Retrievers, “Rea” and “Mole,” were spotted at an agility competition. Owner of the mother and daughter dogs, Tracey Kavanagh, later said: “It all happened so quickly and unexpectedly. We were taking part in an agility competition a couple of years ago. A lady came up, introduced herself as an animal film/TV agent and said she was looking for well-behaved labradors to star in The Crown.”  Rea played the part of Lord Mountbatten’s dog, and both she and Mole had scenes portraying a family barbecue the Queen and Prince Philip were having with their children. Tracey intends to continue her dogs’ film careers.

There were other breeds in the series, as well:  In one season, Princess Margaret was seen with Pugs, in another, she had a blonde Long Dachshund. There are scenes of English Springer Spaniels at work, and a Bernese Mountain Dog has a “cameo” appearance outside Number 10 Downing Street.