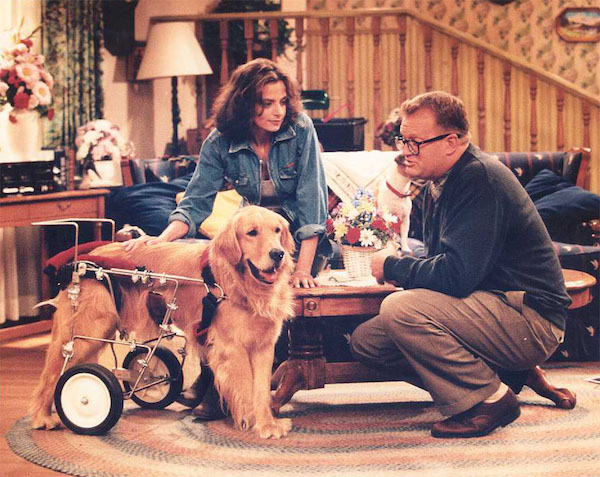 His name was “Ajax,” and the Golden Retriever appeared on the Drew Carey show as Carey’s dog, “Speedy.” Early on, his role had him perform in a wheelchair fit for dogs. Indeed, he may still be the only (fictional) wheelchair-bound dog to have been part of a TV series, but partway through the season, a storyline decision was made to have the dog undergo surgery so that he could walk on all four legs.  The real reason for change? Ajax wasn’t any good at steering the chair, and he was constantly bumping into characters and furniture on the set.

Ajax was a busy dog! He also worked as the understudy for “Comet,” from the show, Full House. It was a lucky break for the dog whose family couldn’t take him along when they moved, and as it happened, Janine Aines of Animal Actors of Hollywood was looking for a backup for Comet when she saw the newspaper ad. Almost immediately, she saw the dog’s potential. He quickly learned how to fake a broken leg, howl on cue, cover his eyes with his paws, shake a snake, and raise his hind leg on cue.

He wasn’t the only dog to have appeared on the popular series. The eighth episode of the third season, “Dog and Pony Show,” was memorable to certain fanciers for a couple of reasons. Without getting too far into the weeds, the plot was essentially this: One of the characters was roped into dog-sitting a prized show dog named “Lucky.” Lucky’s breed is presented as being very valuable because of its unique coat, and as it happens, the dog is also a valuable stud dog. The character, however, ditches the responsibility by leaving Lucky with title character, Drew Carey, without even consulting him.  The dog is dropped off at Drew’s home without so much as a note, and when Drew gets home, he assumes the dog is a stray and takes it to the vet where it’s been shaved and neutered.

As you can see, “Lucky” is a fully corded Puli, and perhaps the best line in the entire episode referred to “Lucky having lost his charms.” Ba-da-boom.