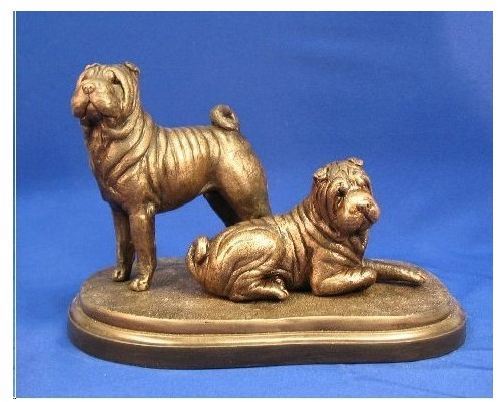 A guard dog at work has a distinct body language: His tail may be held high and stiff, and may even wag slowly. His head is held up, and indeed, his whole forward learning body carriage exudes a dominant, confident posture.

A similar profile was bred into the Chinese Shar-Pei. Used by Southern Chinese farmers for millennia as a multi-purpose working dog, at one point in its ancient history, dog fighters began to pit Chinese Shar-Pei against each other.  With a large head carried proudly, a high set tail (a characteristic feature of the breed), and a scowling expression, other dogs instantly recognize the tacit message: Don’t mess with me. Indeed, the study guide for AKC Judges mentions that the breed’s old standard actually stated a “warrior like stance.”

The same study guide answers the question: Why the wrinkles?

As a hunting dog, the breed’s wrinkly skin protected the dog against wolves and boar who got a mouthful of skin but left vital organs unmolested;  it also allowed the dog to turn on an attacker of his own species. The wrinkly skin, however, is just one fascinating aspect of the largest organ on this breed:  Its skin contains a heavy mucous (mucin) that promotes healing and quick sealing of a wound, while the short bristly textured coat has barbs at the end of the guard hairs that attackers do well to avoid. And finally, dark pigment in the mouth was thought to ward off evil spirits.

Image: Chinese Shar Pei Pair on Base in bronze by Dannyquest Designs is available here