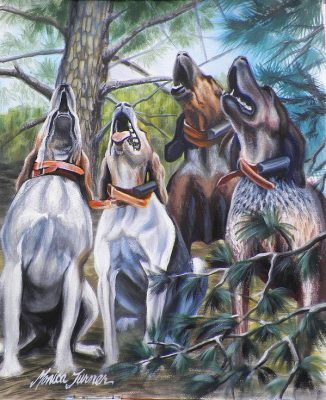 Put your dogs out of the room and check out the video below. It’s 39 seconds long, but five seconds will do you. Just saying.

What you just heard (and maybe everyone else in your neighborhood) is known as a “chop.” A chop is a staccato-fast-short series of barks that typically happen with a coonhound has “treed” the prey. It’s different from a “bawl,” a prolonged bark or voice of the hunting hound when it’s on a track. Coonhounds in general have an impressive repertoire of vocalizations, and the way a coonhound “gives tongue” is different when he’s on the trail of a hunted animal than the distinctive baying he lets out when he’s finally got his critter in a tree. Most who’ve heard coonhounds vocalize have described their voices as sweet and pleasant, though the folks who’ve heard them during night hunts have called it haunting. Coonhound owners call it part of living with their respective coonhound breeds (there are six accepted by the AKC).

Image: “Sound Of The Hound” by Monica Turner is available in poster, print, stationery, and home decor items here.